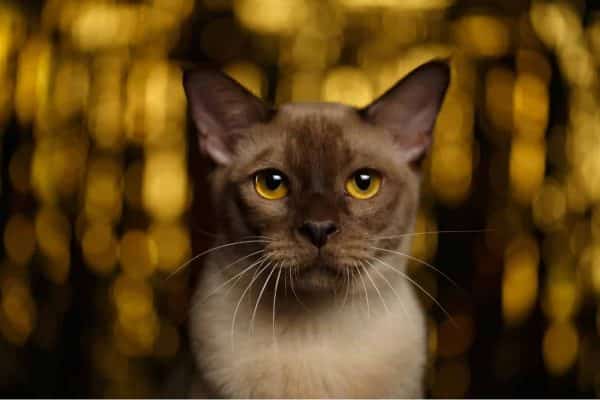 Posted at 08:48h in Cat Breeds by Caitlin 2 Comments
0 Likes

Perhaps the most interesting thing about my physique is I look deceptively lighter than I actually am. I love seeing the surprised looks on people’s faces when they lift me up and discover I am not the peewee feline they’d assumed I was.

This is the reason why most fanciers dub my breed as “bricks wrapped in silk.”

Sure I may flaunt a frame that is not as brawny compared to other cats, but my body is really quite muscular. Apart from having a broad chest that is accented by a slightly thick neck, I’ve also got powerfully-built shoulders that are stockier compared to other medium-sized felines.

I’ve always preferred to describe my legs as athletic. They’re not too bulky nor skinny and taper down to paws that are noticeably, beautifully round with the knuckles showing.

Now while these legs may look rather dainty like a ballerina’s, I can easily launch into the air with a simple kick from these powerful limbs. For starters, it is prominently round yet very compact. And just to take the wow factor up a notch, it is also one of the very few examples in the feline world that highlights a pair of visible cheekbones.

Topped off with a pair of medium-sized pointy ears and eyes that are set wide apart, I have the general appearance of knowing more than you could ever fathom.

My coat is very fine and silky. It has a glossy sheen and is set close to my body, with almost no undercoat.

Although there are four primary coat colors that are attributed to my breed, namely champagne, blue, platinum and sable, shades like chocolate, lilac, cream and red are also recognized by cat registries.

In the world of cat fancy, I’ve been often considered as one of the most inquisitive pedigreed felines. Or in simpler terms, I’m very nosy.

I just can’t help myself – I just have the urge to get in on anything that’s happening in and around the household. It really doesn’t matter if my human companions are giving the floor a quick mop or perhaps choosing a spot for the new sofa. I am so there. But what I lack in boundaries I make up for with my adorable playfulness. Unlike other felines that seem to mellow with age, I will remain bouncy and frisky well into adulthood.

I am also quite daring and fearless, performing outrageous feats that will thoroughly impress onlookers like climbing cabinets and jumping all the way down without a moment’s hesitation.

But don’t mistake my light, playful nature with intellectual levity. I am no airhead.

In fact, I have a highly intelligent and sensitive nature. Besides finding it easy to learn a trick or two, I also have a knack for comprehending various human gestures and facial expressions. I am a master of reading my human’s moods and it’s not uncommon to see me sitting in your lap or giving you a snuggle when you’re feeling a bit under the weather.

My playful nature and keen perception also extends to my overall social life. How so? Well, most people I meet are very surprised when I mention that I’m from the feline world.

“But you’re so friendly!” they exclaim and I have to hide a smile as I explain that not all cats are anti-social. My breed is actually very friendly and sociable. In fact, I am really open to meeting new people and other animals. I’ll even allow myself to be petted by strangers and wouldn’t turn down an appreciative smooch from a cat-friendly dog. Some felines consider this absolutely scandalous behavior, but hey, as I always say: haters gonna hate. Can’t let it get you down, you know

I guess that alone says a lot about me. You see, one trait that fanciers have always admired about me is my very trusting nature. Compared to other breeds, I have the tendency to play with visitors and cat-friendly animals at the drop of a hat. However, this is also an attribute that can be a potential setback since I won’t protest if carried off by a stranger or being roughhoused by dogs and other cats. Yea, I just don’t get that whole stranger danger mentality. So unless you get me on a leash and provide full supervision, aficionados of my breed highly recommend keeping me indoors.

Oh, and speaking of full supervision, one thing to take note of if you’re looking to have me as a pet is that I am a cat that requires a lot of attention. I consider being noticed and showered with affection as must-have events in my everyday life. So obviously, I don’t do well with being all alone and can get pretty restless if you leave me by myself for a very long time. If you do need to be out of the house for long periods of time every day, it’s really important to give me a companion, say a cat-friendly dog or another Burmese to play with.

Lastly – and this may sound a bit crazy – but I don’t think twice about snuggling up in bed with my humans or letting myself into the bathroom during your private moments if I get the urge to have a belly rub or a gentle pat on the head. My shrink says I have boundary issues so make sure you lock the door if you don’t want me barging in on you.

Although I have no problem adjusting to people and new environments, I am a feline that can be too much to handle for first time cat owners. Apart from being rather demanding when it comes to play, I also don’t hesitate to show my displeasure if not given the affection that I think I greatly deserve. And yea, some people just don’t appreciate a vocal, opinionated cat who knows what she wants.

Given that my human companions already have experience rearing and sharing a home with cats, I can easily live with a family of two or ten.

Oh, and you’ll probably never hear a feline admit this, but I prefer humans who are persistent with, um, discipline. You see, I have this tendency to do things again and again – even the annoying things – if not shown the error of my ways immediately. As cute as I am, you have to be ready to correct me when I’m naughty, even if act stubbornly resistant.

According to an ancient book that gave detailed descriptions of the cats in and around Thailand and its neighboring countries written during the Ayudhya Period (1350 – 1767 A.D.), there is a very striking copper-colored feline that lived in temples and royal residences. Besides being a great mouser, the priests also bred this cat for its very friendly and easy-going attitude. It is described as having a round face and a smiling expression. And from the description, I’ll bet my fur that those royal cats was one of my ancestors.

It’s not just me that sees the resemblance – avid cat enthusiasts avidly agree that the cat depicted in the book is the Burmese.

As for how the very first Burmese cat made it to the west, well, that’s an interesting story. The very first Burmese cat arrived in the United States in the 1930’s. Her name is Wong Mau and she was brought back home by Dr. Joseph Thompson, a dedicated cat aficionado. Thompson simply fell in love with Wong Mau’s striking colors and very amiable attitude.

He adored Wong Mau so much that he didn’t think twice about propagating her breed as soon as possible. Thompson contacted his friends and fellow cat fanciers, Billie Gerst and Virginia Cobb, to help him set up a comprehensive selective breeding program. He also sought assistance from geneticist Clyde Keeler to help him find the best mate for the molly.

They ended up pairing Wong Mau to a seal-point Siamese named Tai Mau. The results of the breeding program pleased Thompson so much that he even penned an extensive article on the same for the Journal of Heredity. It was published in 1943 and holds the record as the very first study on feline genetics included in a national journal.

Although the Cat Fanciers Association (CFA) began to officially recognize the Burmese in 1936, the registrations were suspended until 1953 because some breeders deliberately used hybrid Burmese-Siamese specimens in their breeding programs. However, after ensuring that the Burmese lineage is finally re-established, our breed was finally given a championship status in 1957.

When it comes to keeping me healthy, I am one of the most low maintenance felines around. In fact, thanks to my diverse gene pool. my breed is known as one of the least vulnerable to health issues in the whole world of cat fancy.

Of course, there are still standards to be met but this is as simple as regular grooming – once a week will do – to get rid of loose hairs that might make my hair kinky or matted.

Other than that, just see to it that my exercise needs are being met by having a perch or three around the home to both satisfy my itch to clamber up to high places and keep me fit.