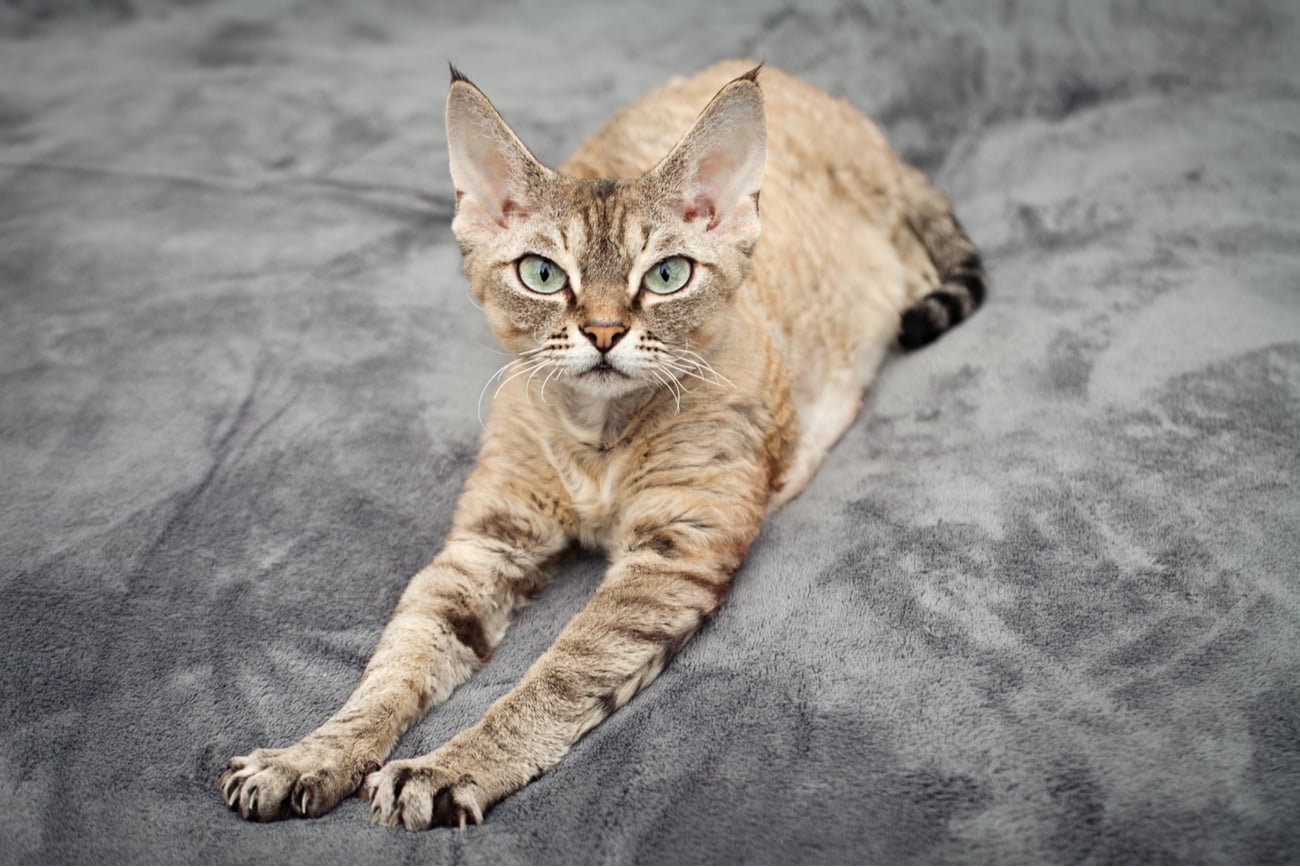 Posted at 05:32h in Cat Breeds by Caitlin 2 Comments
0 Likes

Fanciers consider me as one of the most unique looking cats in the feline world. Let’s kick things off with my odd-shaped head. Apart from being triangular in structure, it also appears a bit big for its size. My ears and eyes are large and my nose is slightly sloping.

My face is framed by a short muzzle and a strong chin, with prominent cheekbones that give me an elfin look. My eyes come in a variety of shades, particularly yellow, orange, hazel, gold, green, copper, blue, aqua, amber as well as odd-eyed.

Now while I have a very slender body that makes me look fragile and rather scrawny, I am well-muscled and flaunt strong bones. My neck and chest are willowy yet noticeably compact. Moreover, my legs are long and wispy, but still have a good amount of muscle on them.

Perhaps the most conspicuous physical attribute I have is my coat. It’s very short and soft and has a curly texture that really stands out.

Interestingly, dedicated fanciers look for a fine, full-bodied coat that spreads evenly across the body of a Devon Rex when selecting a one of us for show. Did you know that I have very delicate guard hairs (these are the hair patterns on my sides, back, stomach and upper legs that form my outer coat)

This attribute makes me prone to having temporary bald patches from time to time. Even my whiskers and eyebrows share this bizarre fragility.

Bare patches that display even the least amount of skin are not allowed in conformation shows though, but my fans absolutely insist I am lovable even when balding.

‘Though my coat is fragile, it is gorgeously colored. Although the most common coat colors I have are blue, white, red, cream, black, seal, champagne, lavender, platinum, cinnamon, brown, chestnut, fawn, chocolate and frost, they can also have more than 70 different shades and patterns.

I am well-known for my very sociable and playful nature. Depending on my mood, I can be seen snuggling on the laps of my human companions or engaging them with interactive games like fetch or tag. I also have an affinity for following my guardians around the house from time to time. And while I don’t like water too much, I won’t think twice about braving tubs and showers just to be with my loved ones.

Although I am not as demanding compared to other breeds, I won’t hesitate to trill and coo if I want to be given a lil bit of attention and a lot of affection. I even talk to birds and insects that I see passing by while relaxing on the windowsill.

I am so friendly and easy-going that I won’t have a problem getting along with young kids and other pets like dogs and cats. I can also be pals with the occasional rabbit, ferret or bird. Compared to other felines, I don’t show aggression easily and will just walk away if I feel the play is getting too rough.

I am an excellent jumper and can easily launch myself into the air with a simple kick of my powerful legs. This attribute also makes me a very good climber. Besides having the ability to scale every high spot in the house without breaking a sweat, I also like to wow my guardians by scrambling up ledges and high cabinets to show off my skills.

Oh, you should know that fanciers have described me as a “food hound” because I have been known to ask for scraps around the dining table and even take food directly from the mouths of my human companions.

I’m very good at getting what I want, whether it’s good for me or not, so please keep in mind the sorts of food I can and cannot eat, okay

I am pretty easy to take care of, even for first time cat owners. Given my very sociable and friendly disposition, I am also an ideal feline for families with young children and other pets. All I ask is that I’m given regular attention and affection.

The only thing you should be warned about is that I like to leap high into the air and climb on top of everything and everywhere whenever I get in the mood. And sometimes, I can get really mischievous especially when food is involved. If you’re okay with these little idiosyncrasies of mine, we’ll get along famously.

Just to set things straight, I am not hypoallergenic unlike what many people seem to believe. Although I may not shed as much as other felines, I still give off the enzyme Fel d1 through my falling hairs that can trigger allergic reactions in humans.

My breed began to take root in the county of Devonshire, England in 1959. It was during this time that a local cat fancier named Beryl Cox took a pregnant stray in and was amazed to see that there was a very unusual looking kitten in the resulting litter. Unlike its brothers and sisters that sported long-haired coats, this kitten had an odd curly coat that was noticeably short and very fine.

Although it did not share the more common look of its litter mates, Cox instantly fell in love with the kitten and named him Kirlee.

A few months later, Cox was reading the local paper when she chanced upon an article about an upcoming cat show that featured the last curly-coated kitten in England named Du-Bu Lambtex. She immediately contacted the kitten’s breeder, Agnes Watts, and told her that she also had a cat that shared the same physical attribute as Du-Bu Lambtex.

Cox also went on to suggest that maybe Kirlee could help bring up the number of curly-haired cats in the country by pairing the two together. Watts agreed and prepared a breeding program for Kirlee and Du-Bu Lambtex. However, the results weren’t what they expected because the litter produced was purely composed of long-haired kittens.

Upon closer investigation by cat geneticists, they discovered that the genes that make Kirlee’s and Du-Bu Lambtex’s coat curly are entirely different. This only meant one thing: Kirlee carried an unknown Rex gene and may be the foundation of a new breed of cat. This is how the Devon Rex breed was born.

The Devon Rex lineage is so well-bred that every cat belonging to it can trace back its ancestry to Kirlee. As for what happened to my very first ancestor? It’s really sad news. Kirlee met an untimely death due to a road mishap in 1970.

RIP, Kirlee. And thank you for our beautiful breed.

It really doesn’t take much to keep me healthy and happy. I don’t have any special requirements, save for an occasional cleaning of the ears and nail trimming.

Just one last thing – most cat aficionados recommend keeping me inside the home since I can easily hurt myself when allowed to play and frolic outdoors.