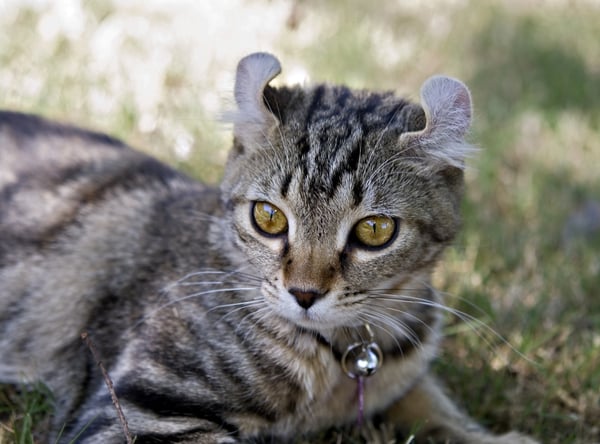 Posted at 05:32h in Cat Breeds by Caitlin 5 Comments
0 Likes

Last Updated 1 week ago by Caitlin

The Highlander breed is a big, beautiful, and proud cat. With a thick coat, muscular physique and boxy muzzle Highlander cats are pretty much unmistakable.

Although the breed has the appearance of a wild cat, Highlanders are actually gentle giants. The idea behind the breeding program was to produce a regal big feline look with an amiable and loving personality. 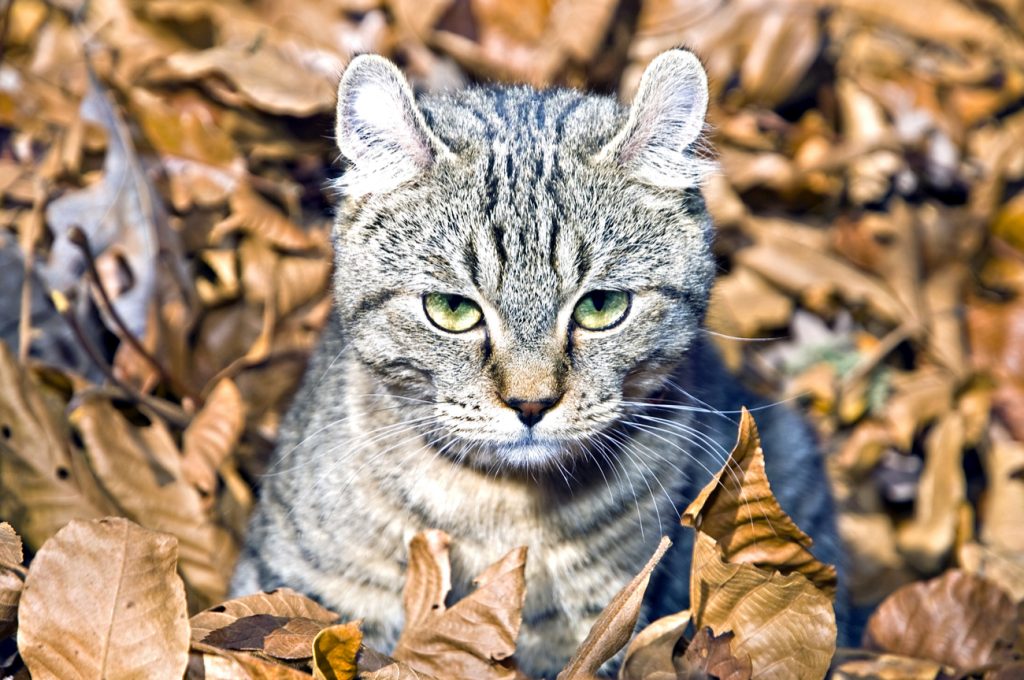 My big, voluptuous figure is a testament to my wild roots. You can see this genetic inheritance from my wild hybrid ancestors in my well-developed torso down to my rippling hind legs. Despite my rather thick coat, my muscular physique is unmistakable.

Even my bones are naturally thick and brawny. My muscles ripple with the slightest movement. Yes, every inch of me looks like a wildcat. And no, most cats don’t want to mess with me. 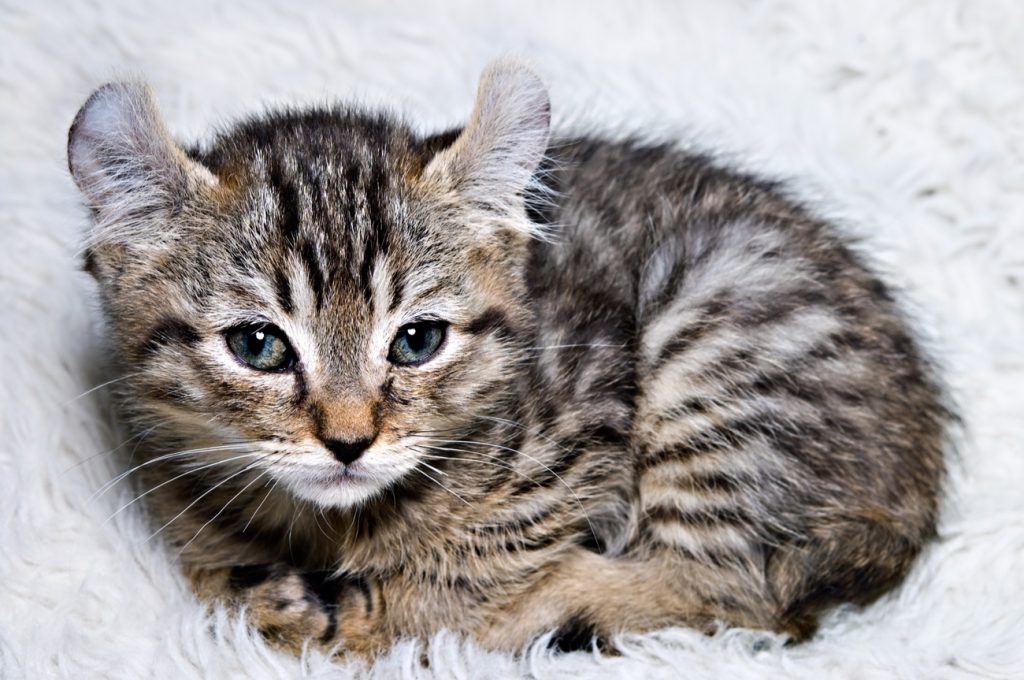 But don’t be intimidated by my beefy body – I have a face that could melt your heart. Sure, some of my facial features are straight from my wild forebears, like my squarish head and my boxy muzzle that’s framed by a sloping forehead and a chiseled chin.

But my large oval eyes soften any guise of ferocity and even make me look quite happy and friendly.

To further sweeten my wildcat looks, my ears have a peculiar shape that make them the highlight of my facial features. 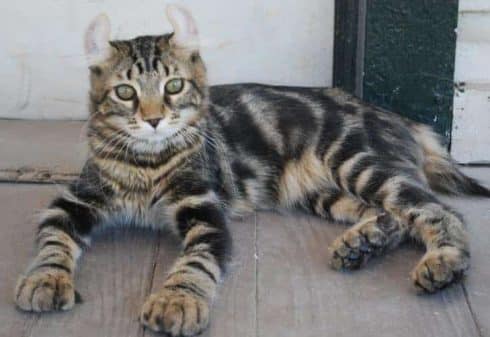 Unlike the ears of other breeds that have rounded or pointy tips, the tops of my ears have a soft curl to them, making me appear as if I have a jester’s cap on.

Although they may look a bit different, they still function properly like any other cat’s.

My coat can be either short or long, but both still have the same resilience and silkiness that is typical of my breed. As for my tail, it must be short, articulated and thick. It is not uncommon to see curls and kinks in it as well.

Although I may have the appearance of a wild cat, Highlander cats are actually gentle giants. My ears are hugely indicative of my personality, since fanciers share that my disposition is more of a clown than a savage feline. Playing, showing off crazy antics and good old goofing around are at the top of my daily checklist.

I love company and will let my human companions know that I’m up for play as soon as they arrive. I’ll even rush to greet people at the doorstep to initiate a game of tag or simply exhibit how high I can jump. 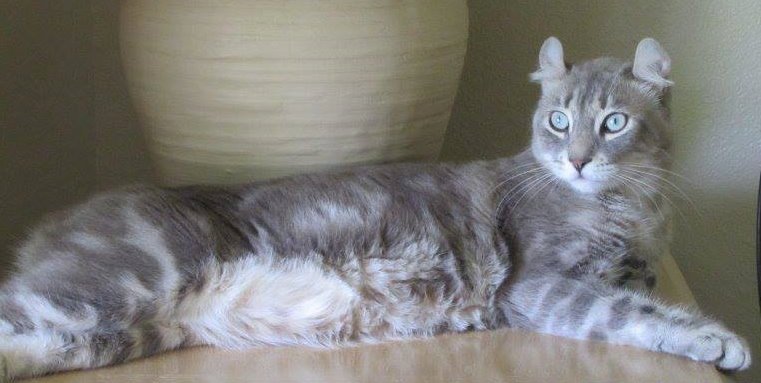 Unlike other cat breeds that can be a bit aloof, Highlanders are very sociable and like to mingle with other pets. I also don’t have difficulty adjusting to new people and environments.

Oh, and I’m safe to keep around younger children since I m very patient and not prone to use my claws when startled or handled roughly.

Despite my sociable and outgoing nature, I’m a fairly quiet cat. You certainly won’t hear me giving impromptu caterwauling performances all around the house. When I do voice myself, I’m more of a trill and coo kind of communicator.

Interestingly, I like mastering tricks and can be trained to walk on a leash as well as sit and even play fetch – if you train me consistently. 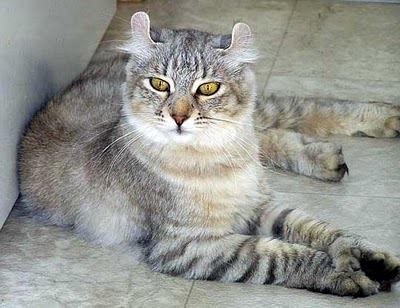 When it comes to my ideal human, I can easily adapt to any home without a fuss. Given my patience and empathy, I can easily establish relationships with a variety of human companions whether they have younger kids, other pets or if they are first time cat owners.

If you’re looking to have me as a pet soon, you only have to keep in mind that I need lots and lots of playtime. Now while I am not as demanding as other cats (I’m looking at you, Havana Brown) when it comes to attention, you have to set aside a few minutes each day to play with me if you want to make me feel loved and cared for.

I also love to be active and a simple game of tag or hide and seek daily will help me work off my very high levels of energy.

The Highlander breed is fairly new in the world of cat fancy. The whole concept of the breeding program back in 1993 was to produce a cat that had the regal “big feline” look, but exhibited an amiable and loving personality.

My breed’s original name was “Highland Lynx” but was changed to “Highlander” in 2005 by the International Cat Association (TICA) during its adoption as a developing breed.

Now while the origins of my lineage are rather ambiguous, cat fanciers share that the breed is basically a result from a cross between the Jungle Curl and Desert Lynx. I got my stocky and thickset physique from both parents, but the peculiar ears are distinctly from my Jungle Curl side of the family.

Interestingly, the Desert Lynx and Jungle Curl have also descended from a variety of cat breeds. Although the details are a bit fuzzy, the Desert Lynx traces its roots to the outcrossing of a domestic cat of either Manx or Pixie Bob descent to a pure Bobcat. On the other hand, the Jungle Curl is the result of the pairing of a curly-eared domestic feline, which is said to be either the Canadian Hemingway Curl or American Curl, and an African Jungle Cat.

Up until the late 90’s, my breed was further refined by being outcrossed to Jungle cat hybrids, Abyssinians, Bengals and Serengeti cats. My breed finally got TICA’s nod to be accepted in the registry’s Preliminary New Breed class in May 2008. Yay!

How to Keep Me Happy and Healthy

Highlander cats are really low-maintenance and don’t have any special needs or grooming requirements. This is the biggest reason why the Highlander cat breed is a good choice for first time cat owners and parents with younger kids.