Posted at 04:09h in Cat Breeds by Caitlin 0 Comments
0 Likes

If you first chanced upon me in the great outdoors, you’d probably mistake me for a wildcat – most likely, the feral lynx.

And I wouldn’t take offense to that, partly because of my easy-going personality and partly because you’d have good reason. After all, I am a strong cat with a wild appearance.

My body is generally compact and muscular, with an overall build that’s brawny and powerful.

My beefiness is very much apparent from my thick neck all the way to my well-developed shoulders and stocky legs.

On top of my strong build, I also possess a generously thick coat that augments my wildcat looks. My coat can be short, medium or long, but no matter the length, it is always thick.
But my most noticeable – and most lynx-like – physical trait is hands down my distinctive bobbed tail.

Besides being anywhere from 5 to 13 centimeters long, my tail can also have a variety of kinks, snags, angles, spirals or can even be shaped like a whisk.

Interestingly, similar to human fingerprints, no two tails are alike even if the cats originated from the same litter.

I may look like a ferocious wildcat, but I have the disposition of a kitten – gentle, patient, playful and extremely friendly. 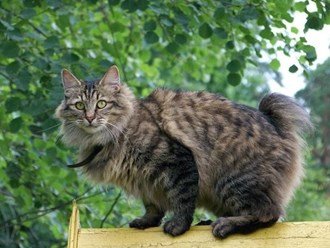 In fact, I am so cordial that I can get along with pretty much anyone – human, little human, or non-human.

My laid back personality means that I am not a demanding cat to have around.

Aside from having the ability to entertain myself by scampering up windowsills, bookshelves, cabinets and other high spots in your home, I can also easily initiate play with other pets, meaning I won’t become anxious even when my humans are our and about all day.

That being said, I still need love and affection and that’s as simple as daily bonding time with the humans near and dear to me. And by bonding, I’m referring to belly rubs and caresses on my neck and behind the ears. One attribute I have that cat fanciers prize is my fairly high intelligence.

Apart from having the ability to master tricks easily, I also like to engage in games and play with toys that stimulate my brain. It is not uncommon to see me getting busy with puzzles even when there are other toys around.

Unlike other cat breeds, I love the water and won’t pass up an opportunity to take a dip.

That’s ’cause in my natural habitat, I am an excellent hunter and can even catch fish in creeks and streams using my paws.

I am a breed that’s ideal for every cat enthusiast. I can easily warm up to any household and build relationships with my humans, whether they’re cat newbies or experienced cat lovers with a multi-pet households. 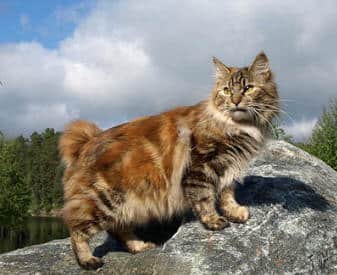 I am even perfect for older fanciers looking for a companion feline since I can exercise all by myself.

One thing you should keep in mind if you’re looking to have me as a pet is that I am an avid climbing buff.

I spend a large chunk of my day surveying high spots to chill out in so I prefer that a home have plenty of these.

I also won’t think twice about showing off my jumping skills from these high places so be prepared to tuck your breakables away somewhere safe.

My lineage originates from the Kuril Islands, which are claimed by both Russia and Japan, which I guess makes me bicultural. There are also isolated populations of my breed in the neighboring Russian islands of Sakhalin and Kamchatka.

But for the most part, we hail from the Kuril Islands, which is where we are named after, ‘though we’re also called Curilsk Bobtail in some parts of Europe. 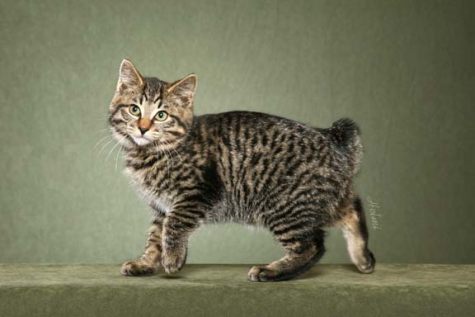 My breed began to gain mainstream popularity in the late 1980’s when scientists doing field research in the Kuril Island decided to bring along a few specimens back to the mainland for observation.

The scientists initially thought that my ancestors were feral and dangerous. However, they were surprised when one of the wild-looking cats approached them and did not even protest when petted.

Apart from their very sociable temperaments, these cats won the scientists’ hearts because it didn’t take long for them to be at home in their new surroundings. A few more specimens were brought back to Russia in the succeeding months. My breed officially joined the ranks of the Soviet Felenology Federation (SFF) in 1991.

Now while it isn’t clear when my ancestors really reached the shores of North America, we do know that my breed was officially accepted by The International Cat Association (TICA) in 1994 and was awarded championship status in 2012. The World Cat Federation (WCF) recognized us in 1995 and the F d ration Internationale F line (FIFE) followed suit just a few months after.

Rearing me is fairly easy, even for first time cat owners. Apart from needing minimal bonding time with my humans each day, I also need minimal grooming compared to other breeds that have coats that can become matted if they don’t get a meticulous brushing daily. 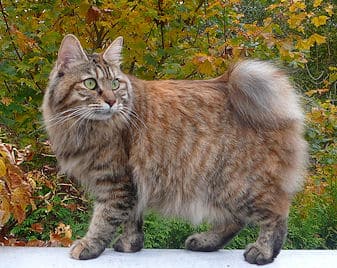