I’m one of the most unique felines you’ll ever feast your eyes on.

How so, you ask? Let’s start things off with my coat – or rather, my lack of a coat. You see, my breed is mostly hairless. In fact, we might be totally hairless, much like the Donskoy. And even when we do have hair, it’s an extremely short coat that has the texture of a peach.

Technically speaking though, my breed has four specific coat types designated by cat registries to determine if a feline of my lineage is eligible for showing.

These are ultrabald, chamois or flock, velour, and brush and straight. Let’s go through a quick rundown of each coat type so you can get better acquainted with me, yes

The very first coat type is ultrabald. Just as the name suggests, a Peterbald flaunting this coat completely lacks one. A feline having an ultrabald coat also doesn’t have any whiskers and eyebrows.

Interestingly, since it is more exposed to the elements compared to its fluffier cousins, the skin of this cat also tends to be rather sticky and warm.

Next comes chamois or flock. Now while a Peterbald having this coat type is still fairly hairless, it can have very sparse tufts of hair on some parts of its body. Just to make things clear, it can still be very tough to spot the hairs on this cat since they are very fine and extremely short.

The third coat type is velour. Fanciers describe this type as having the texture of a light, stubbly beard. Remarkably, a Peterbald with a velour coat may lose a considerable part of it over time, taking on a chamois or flock appearance.

As for the brush and straight types, these are the hairiest a Peterbald cat can get. Peterbald coats of the brush coat type have the peculiar appearance of being unruly and wiry, as if it were given a brief electric shock. It can also have an average length of five millimeters. A Peterbald with a brush coat usually has curled or kinked whiskers and eyebrows. What’s really interesting is this type of coat can eventually fall off sooner or later, turning a cat hairless.

And to top things off, a Peterbald with a straight coat pretty much looks like an ordinary cat. Since it doesn’t possess the recessive gene that makes it hairless, it will grow and keep a full coat all through its life. 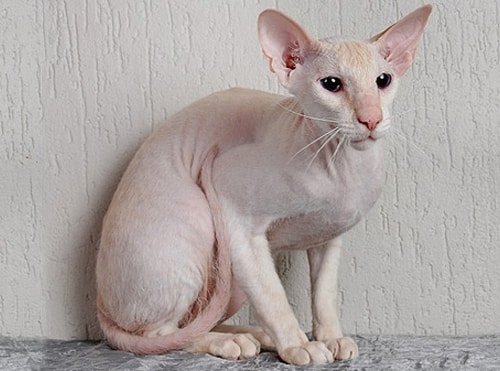 The awesome thing about having a very short coat – or none at all – is that I have the unique privilege of flaunting all the outlines of my graceful figure, without a coat obscuring it.

And I do have a beautiful body, if I do say so myself. It’s medium-sized with a broad chest that is framed by firm shoulders.

Depending on how hairless I am, my belly can appear very prominent, but I’m not fat, mind you – all cats have this paunch, they just choose to hide it beneath their fur.

I am much more honest about my physical features. And why shouldn’t I be? Especially when I’ve got the legs of a supermodel. Yes, they are dainty and noticeably elongated, flowing down to small, roundish paws.

To purrfectly accentuate my long, graceful looks, my tail is reedy and has a whip-like appearance. 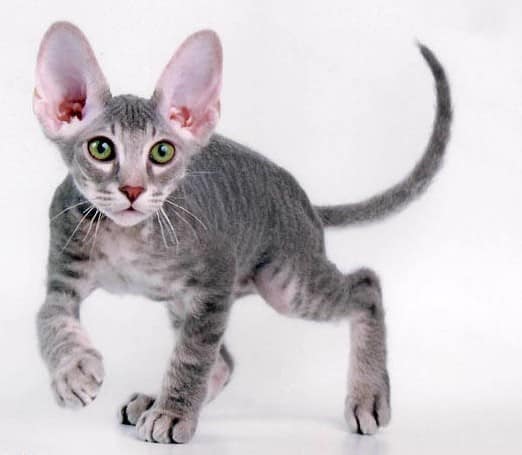 Compared to other breeds, my head is slightly elongated and accented by sharp features. Now while my muzzle is mostly triangular, my nose is round and my chin is rather small, giving me an overall look of a cat that’s curious all the time.

Just to emphasize my inquisitive look even more, I have very large ears that are wide at the base and tips that are rounded.

My eyes are shaped like almonds and have a delicate squint to them. I’ve always been told that besides being very expressive, they also have a distinctive air of mystery to them.

Unlike other felines that have eye colors that correspond to their coats, my eyes can be of any shade.

In the world of cat fancy, I am regarded as one of the friendliest cats ever. Apart from easily getting along with my humans and their loved ones, I also don’t have a problem establishing close relationships with other pets in the household. 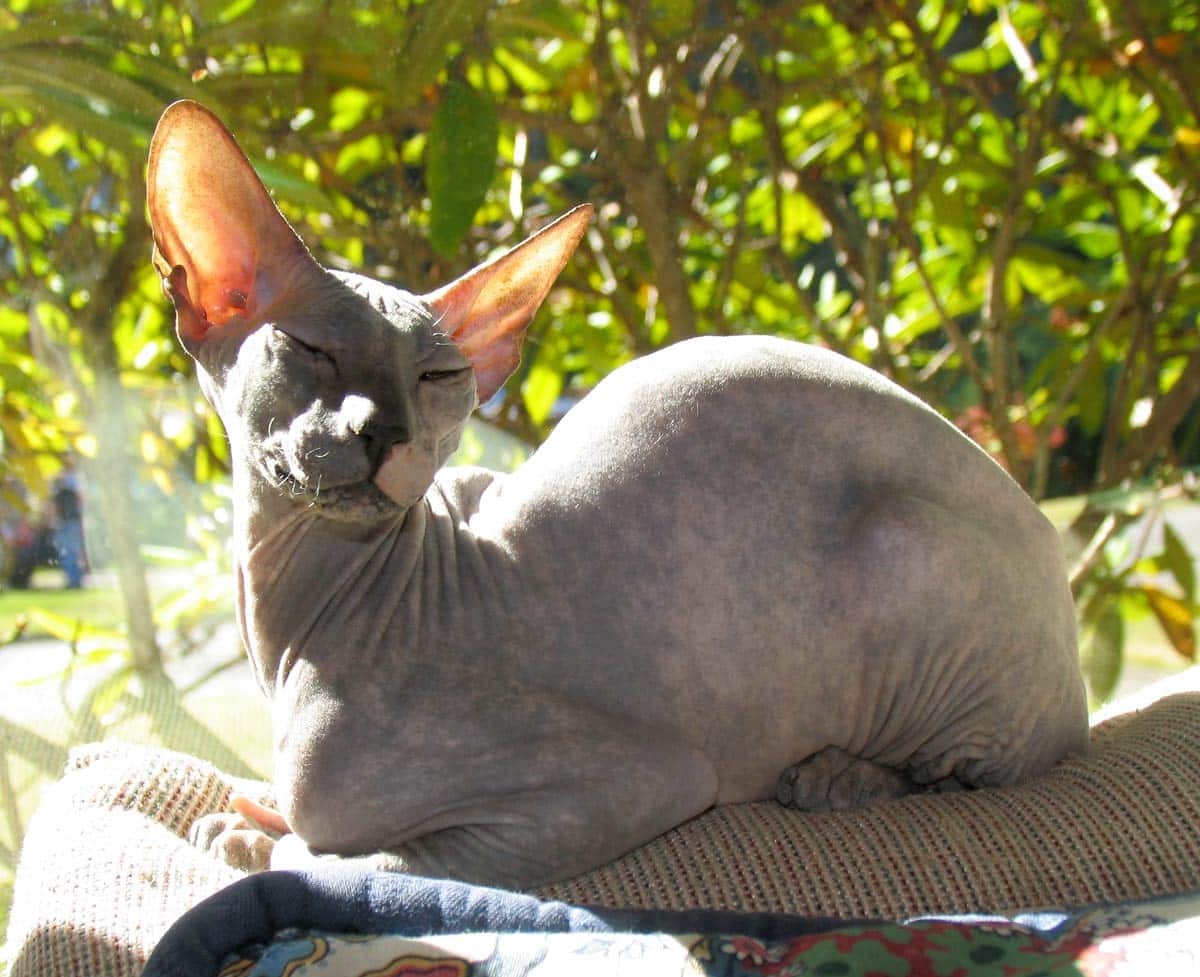 I am so friendly that it’s not even uncommon to see me hanging out near the door every day just to be the first one to greet visitors dropping by.

You see, I’m a very affectionate feline. I won’t think twice about jumping on the laps of my human companions to get a vigorous belly rub or a scratch under the chin and I am even known to give reassuring pats with my paws when I feel my guardians are feeling a bit under the weather.

But my most winsome feature is my inherently patient nature. I don’t resort to using my claws when I feel I’m being handled too roughly and I can easily tolerate horseplay, even from young, rather insensitive kids. If it gets a little too harsh for my tastes, I’ll simply walk away rather than become violent.

To be honest with you though, I do have drawbacks as well. Mostly, I can be quite demanding when it comes to attention. I expect to be showered with affection by my humans daily and I feel quite displeased when my guardians don’t engage me in play or make me feel neglected for long periods of time.

I’m also not a fan of being left alone and I will become restless if my humans do so. And I will make my displeasure known by becoming vocal. I break into impromptu caterwauling performances whenever I feel something is amiss.

Compared to other breeds that only softly trill and coo, I have a loud voice that has a raspy feel to it and I admit it can get annoying at times. This is reason why I can be rather difficult on seniors looking for a companion feline or first time cat owners.

To end this on a positive note, I am active and playful and I especially love brainteasers and toys that fire up my smarts. As such, I love puzzles that encourage me to be creative and end with a treat, as well as interactive toys that allow me to spend more time bonding and playing with my humans.

I am a feline that is not ideal for newbies who are still learning the ropes of cat fancy or seniors looking to have a companion pet.

I am for intermediate cat fanciers who are willing to give me lots and lots of attention every day or else I will just become anxious, loud and rather obnoxious. 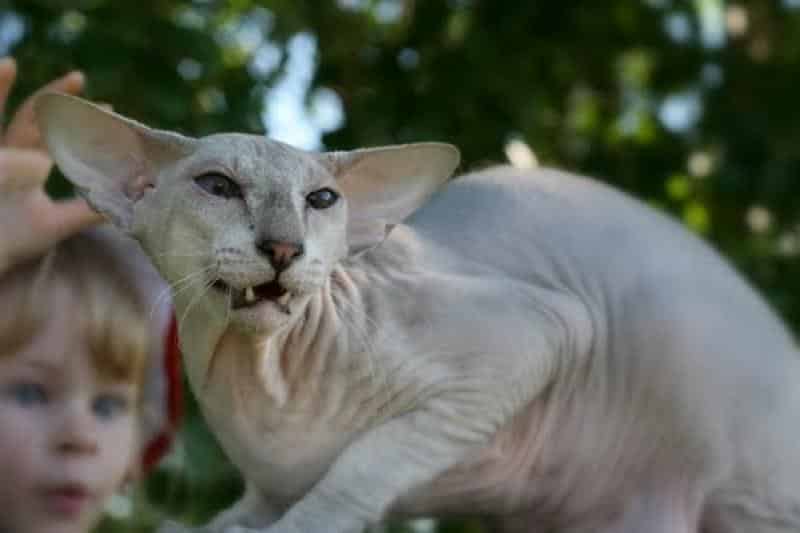 Since I am a cat that is also “fur-challenged,” I am a strictly indoors feline.

Allowing me to wander in areas that are constantly exposed to the elements like porches and front yards can easily lead to me getting sunburn and similar skin problems.

My lineage began in the early 1990’s when the Donskoy was just starting to get recognition as a new breed. In 1993, avid fanciers in St. Petersburg, Russia, decided to experimentally pair a brown tabby Donskoy named Afinguen Myth to Radma Vom Jagerhof, an Oriental Shorthair molly. 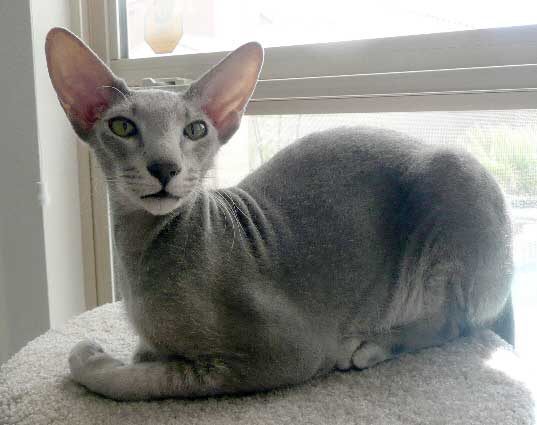 The overall concept of the experimental breeding program was to produce a litter that had the overall physique of the Donskoy, but flaunted the slightly stocky features of the Oriental Shorthair.

Much to the amazement of the breeders, they achieved the look they were hoping for when the first kittens were born in 1994.

One of these kittens, Nocturne Iz Murino, went on to become the foundation male of my breed. Every Peterbald can proudly list him as a common ancestor when genetics are concerned.

To make the experimental breed even more diverse, the Peterbald kittens that came of age were eventually bred out to Russian Blues and Siamese cats. The International Cat Association (TICA) awarded our breed its Championship status in 2005.

Fanciers looking to have me as a pet should keep in mind that I am a feline with a higher metabolism rate compared to other breeds. This means that I require more food and can eat as much as four to five times every day.

This isn’t an attempt to get more goodies – I’m not a Birman Cat, after all. I truly need the food.

I also need frequent baths, at least once every week to get rid of the dirt and oils that may have accumulated on my skin. Grime can easily cause dryness and itching if left to build up over time.

Rubbing lotion and moisturizer on me from time to time is also a smart way to keep my skin healthy and glowing – plus, I like the rubdown.