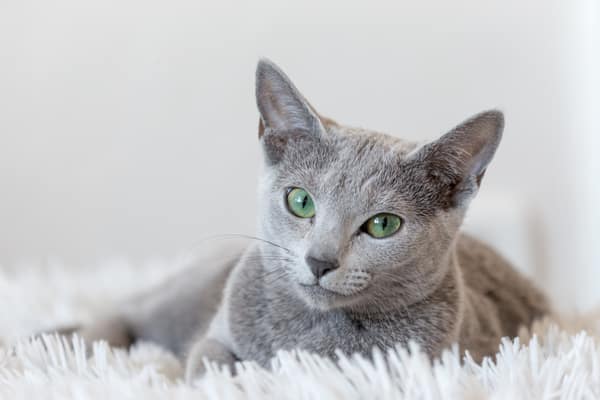 Posted at 04:38h in Cat Breeds by Caitlin 3 Comments
0 Likes

The first thing people notice about me is my shimmering, silvery blue coat and my brilliant green eyes.

Who can blame them? It’s a knockout combination.

I know lots of felines claim this, but my coat truly is one of a kind. Apart from being more noticeably dense than those of other breeds, it’s a striking shade of blue scattered with silver, giving it a somewhat metallic sheen.

And this coat of mine isn’t just beautiful to look at – you’ll be pleasantly surprised to find how soft and silky my thick coat is when you run your fingers through it.


Although I may not be as big and buff as some cats, I am definitely not a lightweight either.

My body may be slender and elongated, but there is plenty of muscle all-around – they’re just arranged in an elegant, ballerina-like manner rather than a bulky muscular hulk shape.

Yes, I’ve got a dancer’s body. And it’s perfectly complemented by my small-ish face, complete with very conspicuous whisker pads that make me look like I’m just about to smile and large, pert ears that give the impression I’m listening to something important.

But the best part? Definitely my large, expressive and vivid emerald eyes. Once my eyes catch yours, you won’t be able to look away.

Ask any dedicated cat fancier out there what I’m like and the first thing you’re sure to hear about is my highly independent disposition. Unlike some needy felines that can get antsy and restless if they feel they’ve been left alone for too long, I have the useful ability to entertain myself when my guardians are busy or away.

And you don’t have to worry that my method of entertainment will be tearing up the curtains or methodically knocking stuff out of your cabinets. You see, I’m not a very active cat.

Don’t get me wrong – I can be fairly playful and will try to engage my human companions in a game or two from time to time. Some of my favorites are good old catch and fetching toys with my mouth. But my overall energy reserves are just too low to ever become bothersome.

That’s ’cause above all else, I value peace and quiet very much. So don’t be surprised if you find me walking away when you fire up the vacuum cleaner or when the radio is tuned louder than usual. This is the reason why I don’t easily get along with other pets since I tend to become aloof when the play turns into boisterous roughhousing. I also get frightened easily, so please don’t try to startle me when you see me sleeping or chilling out in my favorite spot.

Gentle affection always wins with me.

And gently affectionate, I am, especially with those I love most. I just can’t be aloof like other independent cats when it comes to my beloved humans. Over time, I can become very devoted to the humans in my life. So whereas I won’t be doing acrobatics or caterwauling to get your attention, I will occasionally follow you around our home to finally settle in your lap and have my belly scratched, my ears stroked, and maybe even go for a shoulder ride. While I am very loyal and affectionate with my humans – I certainly don’t feel this way about every human. I can be really reserved when unfamiliar visitors drop by the house. So don’t be worried when you see me quietly scooting under the couch or clambering up a bookshelf to make myself invisible when you have guests.

I’ll come back out to be sweet to you when the coast is clear, I promise.

Oh, and I should mention one little quirk I have: I am a stickler for cleanliness and will spend a large chunk of my day meticulously bathing myself. I also demand a tidy litter box and may choose to do my business elsewhere if my litter box is not up to par.

I’m proud to say I am mostly compatible with pretty much anyone and everyone, from newbie cat owners still learning the ropes to older fanciers looking for a companion cat. Yes, I’m that easy to get along with.

I guess most of it has to do with my gently affectionate, easy-going nature as well as the fact that I’m highly independent and don’t demand much attention. Of course the fact that I don’t have any special dietary requirements helps as well.

The only thing that you really need to keep in mind is the state of my litter box. I won’t use it if I think it’s dirty and this is one situation is which I won’t hesitate to become more vocally fussy and demanding ’til my standards are met.

This is why my ideal humans often tend to live in small apartments or similar dwellings – you know, spaces in which messiness and an unkempt litter box are simply out of the question.

My Granddaddy Blue has always told me that our breed is shrouded in legend and mystery. To this day, nobody knows for sure exactly where we came from. Which is purrfect, since all the speculations that abound resulted in many entertaining stories during my childhood.

One popular story is that we originated in the Archangel (Arkhangelsk) Isles in North Russia. British sailors loved our striking looks and placid disposition so much that they brought some of us along on their journey back home.

Another story looks to our fairly thick coats for answers and speculates that we used to make our home in the mountains and similarly elevated environments that tend to have very cold climates. This story gets a little scary – saying that we may have been hunted for our pelts – and I’m glad that this unpleasant detail has never been confirmed.

There’s also one story that we may have descended from the royal felines reared by the Russian Czars. This hasn’t been verified either, but this last one is my favorite story of them all. I think it’s most plausible, especially considering I do have the overall physique and grace of a royal cat’s.

What we do know for certain is that my breed made its very first public appearance in the Crystal Palace of London in 1875, where we were initially introduced as the Archangel Cat. We quickly gathered a loyal following of Scandinavian and British fanciers who immediately decided to integrate us into their breeding programs.

This eventually resulted in the development of our very own showing class in 1912 after being recognized by the Governing Council of the Cat Fancy (GCCF). During this time, a few of us were also imported by ship to the United States to American fanciers.

Now while my breed’s development went into full swing in the years that followed, my lineage suffered a devastating blow when World War II nearly decimated all of my ancestors in and around Europe. Dedicated breeders immediately set up an experimental breeding program in which my forebears were paired with Bluepoint Siamese and British Blues.

Although the European breeders subsequently succeeded to revive our waning gene pool in the next two decades, they also noticed that there was a very big change not just in our physical appearance, but also in the temperaments of the kittens produced.

So in the early 1960’s, British fanciers decided to ask their American counterparts to lend a hand with their breeding programs to bring back the original Russian Blue. They combined the existing bloodlines and ultimately bred GC Felinest Flying High of Velva, a male who is regarded as the “father” of the modern standard of our breed.

True to his fancy name, GC Felinest Flying High of Velva was a remarkable over-achiever. He showed a lot of potential in cat shows, consistently bagging several awards. And in his spare time, he managed to produce 21 kittens that went on to become national winners, grand champions and even Distinguished Merit award recipients, particularly NW Velva’s Blue Viking, who was always in the Best Cat shortlist in the 1970’s.

My breed is still enjoying a steady rise in popularity these days and has even become the 15th most popular cat in the Cat Fanciers Association (CFA) roster. We are also accepted by the American Cat Fancier’s Association (AFCA) and The International Cat Association (TICA).

I may look elegant and regal, but I’m really not tough to take care of. Apart from only requiring a minimal amount of grooming, I also don’t have any special diet requirements.

But again, I need to mention the one key to keeping me healthy and happy: a clean litter box. Keep it tidy, okay? Or I may just have to take my business elsewhere around the house and nobody likes that.