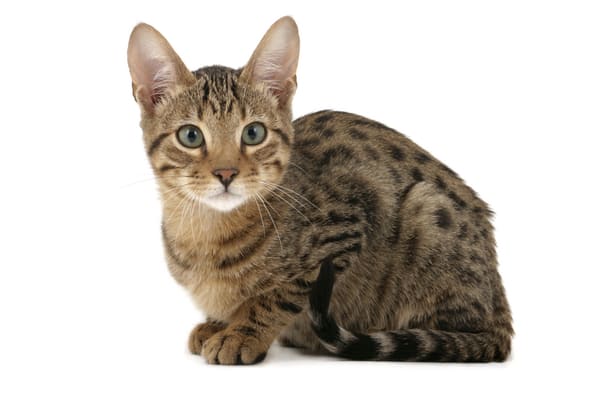 Posted at 06:26h in Cat Breeds by Caitlin 2 Comments
0 Likes

Last Updated 1 month ago by Caitlin

Though I’ll be the first to admit we do look alike, I am in no way related to the Serval. The Serengeti wildcat looks are deceptive since I don’t have a drop of wild blood in my veins. In fact, I’m as domestic as they come – the Serengeti cat breed is the result of pairing two very domestic breeds together, namely the Oriental Shorthair and the Bengal. 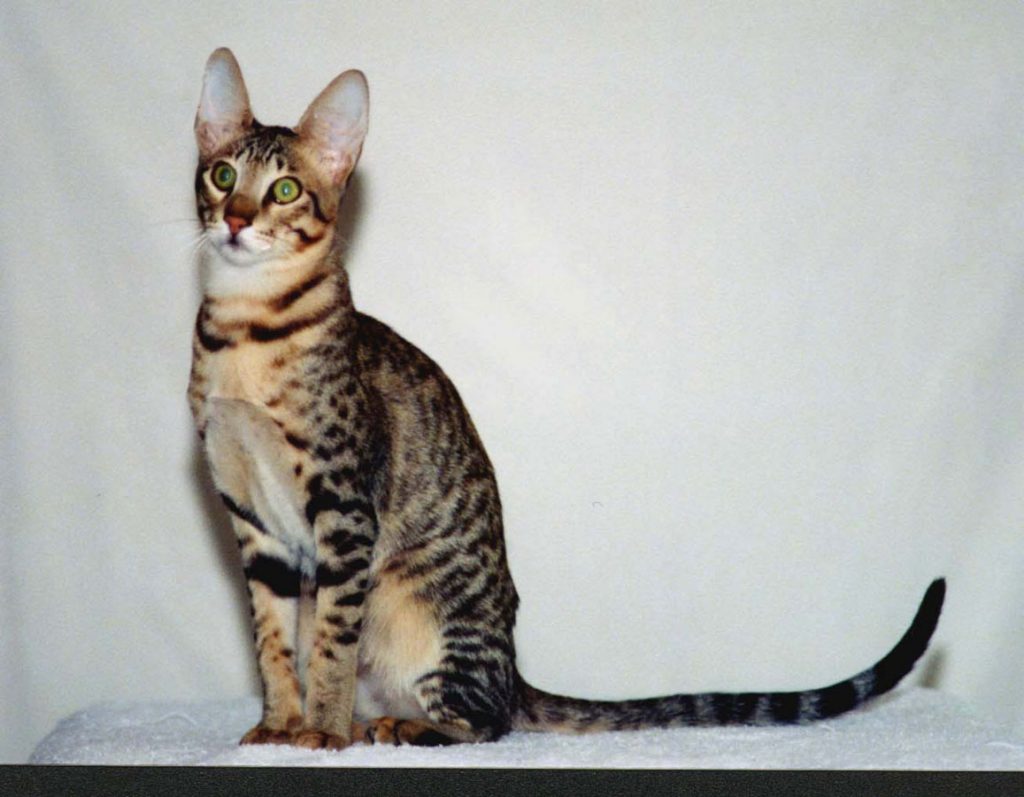 Breed: Serengeti cat
Size: Medium, 6 to 12 lbs
Energy Level: 5/5
Talkative: 5/5
Coat: Short, fine and very smooth..
Hypoallergenic: No
Seeking: Active humans who love listening to me talk.
Child Friendly: Yes, but my bursts of energy can startle the little ones.
Personality: Shy at first but soon turns into the ‘velcro cat’ – loves to follow humans around and start lively conversations.

My physique is muscular yet lean and longer than most, making me one of the most statuesque and graceful felines in the world of cat fancy.

My short, fine coat doesn’t obscure my stunning shape, either.

It clings close to my sinewy build, complementing my fine body with one of only four specific coat colors accepted for my breed, namely black smoke, silver-spotted tabby, solid black as well as brown-spotted tabby. 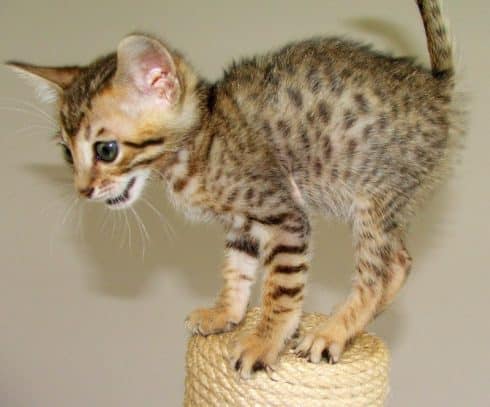 My regal bearing is further emphasized by long legs that look like those belonging to the legendary felines forever memoralized in Egyptian murals.

My paws are smallish and oval, which give them a stylish yet nimble appearance.

And my neck? Its long, graceful lines lend me an aura of elegance and poise that most felines couldn’t even dream of aspiring to.

Topping off my slender neck is my refined, slightly triangular head. You will notice that my ears are very wide at the base and flare at the tips like large, slightly pointed leaves. 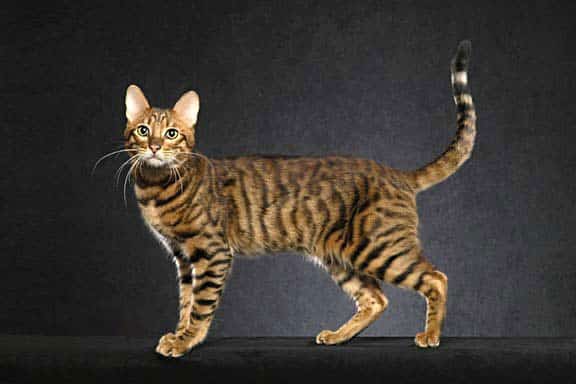 These beauties are the highlight of my wildcat features.

Each of these unique physical attributes make me one of the most photogenic cats around. And I don’t mind posing for a photo or two, just in case you were wondering.

I’m a friendly cat, but I’m not easy.

It’s just not my style to get chummy with people and pets the moment I meet them. I like to take things slow and I will need to know you better before I warm up to you.

It usually takes a day or two for me to start establishing a relationship with my humans and other animals. But when I do start to socialize, you’ll be surprised how responsive and outgoing I really am.

I’ve even earned the nickname “Velcro cat” for my tendency to stick close by my human’s side, following him or her around and nosing in on anything he or she might want to do around the house.

And whatever it is you’re doing, you can count on me to contribute an opinion or two about it. I can be very vocal when something catches my attention and I won’t hesitate to share my thoughts with a few loud meows and purrs.

That’s me trying to engage you in conversation so don’t be rude by ignoring me. Talk back and make it interesting while you’re at it. 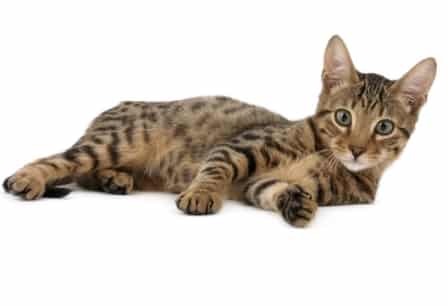 My friendliness extends to little humans as well and I have no issues hobnobbing with young children all day long. Just remember to check in on me from time to time since my habit of zipping to and fro as well as pouncing without warning can easily startle kids and may even upset them.

That’s ’cause the Serengeti cat breed if a high-energy cat, the sort of cat you won’t find lounging around all day. I prefer to spend my days exploring every nook and cranny of the household and closely examining pieces of furniture I hadn’t seen before or were recently moved without my consent. In between my investigations, I’ll give my legs a vigorous workout by running laps around my territory.

I am also always on the lookout for more stuff I can play with so you should make it a point to hide things you don’t want me to get my curious paws on.

And speaking of curiosity, I have lots of it so keep me indoors. Always. I may look like the sort of cat that can handle myself wherever I go but open spaces get me very excited and I can’t make promises I won’t injure myself or get lost when allowed to go outside.

The indoors provides plenty of adventure for me anyway, as long as you have plenty of space and high-reaching perches for me to explore, like cabinets, windowsills, and bookshelves.

That means being responsive to my constant musings. Like I said, I have a lot to say and if you’re going to be my cat lover, you better like hearing what I have to say. As well as me sticking close to your side so you can better hear all the thoughts on my mind – you’d better like that, too.

Startled easily? I’m not the cat for you, since I have a propensity to suddenly clamber up the furniture every once in awhile. And that’s not all – I’m very high energy so I’ll need a human who can keep up by engaging me in regular play time and games.

The Serengeti cat breed is the brainchild of Karen Sausman, an avid cat fancier as well as a conservation biologist. She is also a respected breeder who owned the Kingsmark Cattery based in California.

In the early 1990’s, Sausman noticed that more and more cat fanciers were jumping on the exotic pet bandwagon to get their hands on wild cat species to domesticate them.

As a staunch supporter of conservation, this inspired her to initiate an experimental breeding program in 1994 that aspired to create a wild-looking feline from domestic parents.

This was primarily to deter fanciers from buying more exotic cats and potentially putting them on the endangered list.

Sausman also let her fellow conservationist and cat fancier friends in on her plan to make it as successful as possible.

After long, extensive deliberation, Sausman and her friends agreed to aim for the look of the Serval, one of the cat species that was very popular in the exotic pet trade. And amazingly, they were able to produce the look of the Serval by breeding Bengals and Oriental Shorthairs – which makes me a domestic cat with the looks of a wildcat. The best of both worlds.

Just in case you’re wondering, both the Oriental Shorthair and the Bengal come from very diverse feline gene pools. Apart from possessing genetic makeup from domestic breeds like the Siamese, Burmese and the Abyssinian, these cats also have a few wild relatives in their family tree such as the Asian Leopard Cat as well as the Egyptian Mau.

Karen Sausman and her friends finally produced a litter of kittens that had the physical characteristics they were aiming for in 1995. They decided to name the juvenile breed “Serengeti” as a tribute to the African plains where Servals thrived. We are currently recognized by The International Cat Association (TICA) and are granted the preliminary new breed status in their roster.

Thanks to my diverse gene pool, I am a fairly hardy cat who’s pretty easy to take care of. I only require minimal grooming and I don’t have any special diet needs.