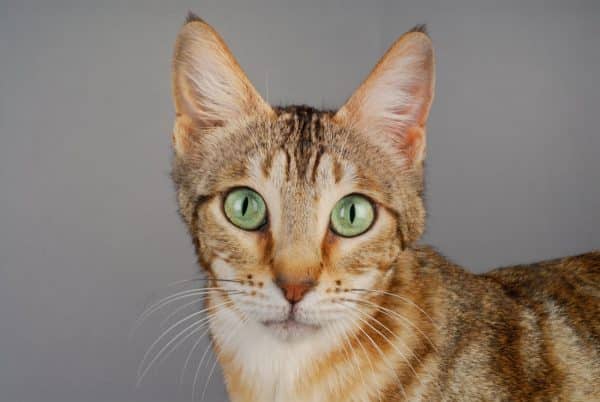 Never heard of me? No worries, most people haven’t. That’s ’cause I’m one of the rarest cat breeds in the world.

But that’s not the only reason most humans do a double-take when they finally get the opportunity to catch a glimpse of me. You see, I am the proud owner of an absolutely unique coat.

While other felines have a simple tabby-patterned coat, mine is highlighted with with an array of blotches that give it the appearance of tree bark.

Some call it my distinctive ‘wood grain’ pattern. Others call it an African tabby pattern. I simply call it gorgeous. 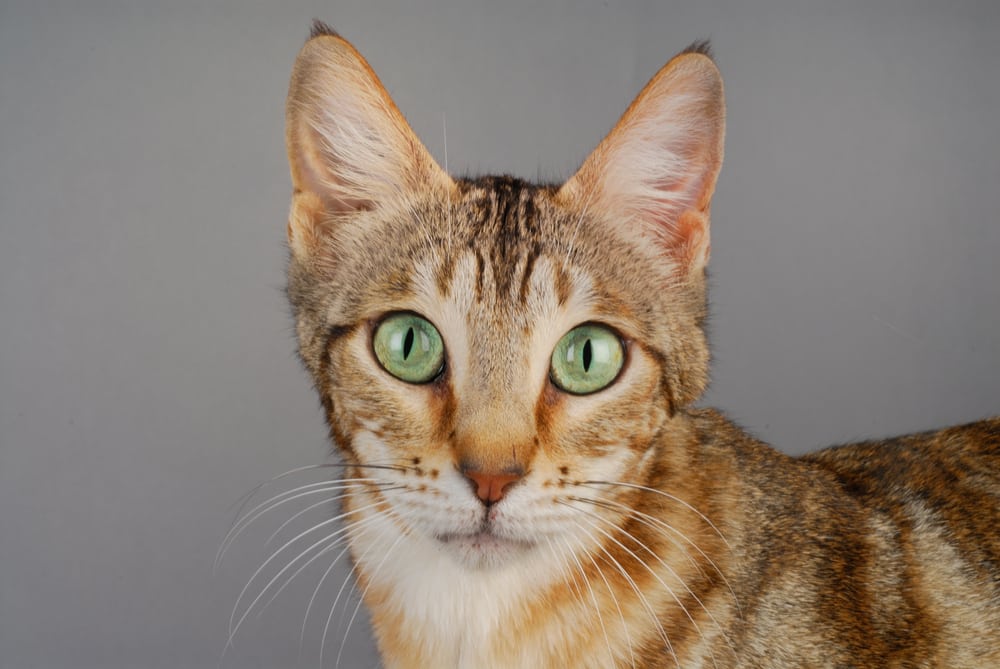 Breed: Sokoke cat
Size: Medium, 5 to 10 lbs
Energy Level: 3/5 (but with bursts of activity).
Talkative: 3/5
Coat: Short, dense and very close to the body with an African tabby pattern.
Hypoallergenic: No
Seeking: Sensitive yet playful humans looking for commitment.
Child Friendly: Yes
Personality: Extremely attentive to and sensitive to the feelings of my humans, intelligent and playful, sociable but needs time to warm up. 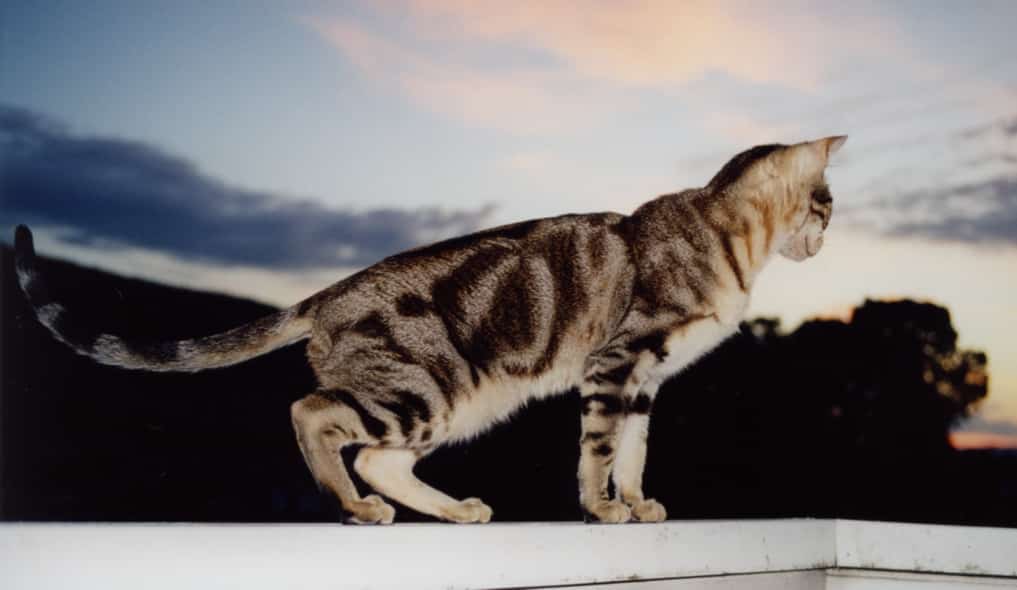 This wondrous coat of mine is also shiny, very short and elastic, lying close to my body without an undercoat so as not to obscure my springy, athletic physique.

This is a lucky thing, since I have the sort of graceful build that deserves to be observed. Especially when I move – everyone tells me I am a marvel to watch in motion, combining the competent power of the cheetah with the fluid glide of a dancer.

But my body’s not just nice to look at. I’m exceptionally athletic and can easily break into a dash whenever I feel like and climb up to heart-stopping heights without a fuss. 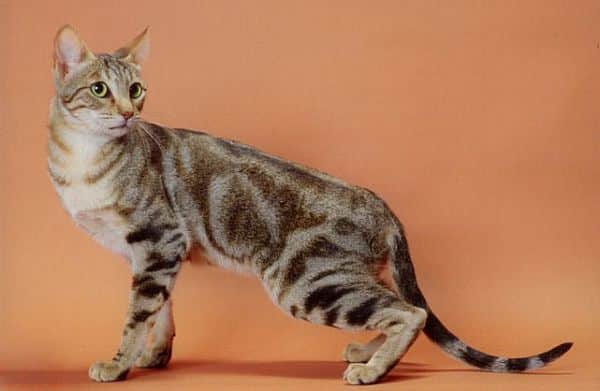 Don’t be too impressed – it’s not that hard with legs like mine.

These long, willowy beauties are a testament to my wildcat lineage and provide whatever oomph I need to dominate my surroundings.

Interestingly, I naturally walk with a very distinct tiptoe where I raise my paws ever so slightly as if ready to pounce at a moment’s notice. Which I am.

As for the rest of my looks, I have a long, elegant neck that perfectly complements my small, triangular head.

And my face is as model-like as my body, with sharp features that include a strong nose, well-sculpted cheeks and a keen chin that lends me an air of sophistication and inquisitiveness all at the same time.

All that’s topped off by a pair of what must be among the most unique ears in the world of cat fancy. They are prominently spread out on the top of my head as if I’m perpetually eavesdropping and shaped like those of a puma’s or leopard’s.

To complete the wildcat look, my ears are also scattered with tufts of hair. Absolute purrfection.

Although my lineage originates from the wild, I have the disposition of a friendly, sociable domestic cat. It’s easy for me to get chummy with humans and other pets and as such, I’m considered one of the sweetest cats in all the feline world.

Wild cat looks with domestic cat charm – I am truly the best of both worlds.

The thing about me, though, is that I am not easy and I do take my time in warming up to you and my new environment. But once I do, I am in for good.

And as an extremely people-oriented cat, that means I love to get in on everything my guardians are doing. So expect to have me settle in your lap as you watch your favorite TV shows, follow you around when you’re busy with household chores and even clamber up the counter to be closer to you when you’re whipping up something in the kitchen.

I won’t even hesitate to sidle up to show you gestures of affection when I think you feeling blue. Those might come in gentle pats or kneads with my paws but if you’re really lucky, I might even engage you in a discussion. Especially if I think you need conversation or a funny story to brighten up your day.

Yes, I can be a chatty cat at times, but the good news is that you’ll never find my voice irritating since I prefer to communicate in soft meows and purrs. Although there will be instances from time to time that I will raise my voice a bit, it’s only when you’ve neglected to do something really important, like refill my food or water bowl.

When I’m not occupied with my humans, I let my playful, active nature loose and usually go for a run around the house, chasing anything that catches my fancy and even climbing curtains, cabinets and scaling wall ledges. You’ll see me jump and pounce to my heart’s content whenever I get the urge to stretch my limbs.

Oh, and FYI: I’m not opposed to putting on a show or two for you and your guests. Especially if I’ve got toys that allow me to show off my acrobatic skills. Even better if it’s something interactive that lets my human play with me, like balls, kitty lasers or poles with feathers tied at the end.

Just one or two will do for me. Unlike other cat breeds, I am not materialistic at all, usually preferring just one or two toys that remain my favorites well into adulthood.

Now while I am generally a nice cat, I m not a feline that is ideal for every fancier, especially total newbies or people looking for a quiet, lazy companion cat. My energy levels can be off the charts at times, which can be a bit tough to handle for newbies and older fanciers. However, if you already have experience rearing a cat and looking to “upgrade” to a much more challenging breed to take care of, then I am the feline to go for.

Even if you’ve got kids. I am very patient with little humans and you won’t find me easily getting irritated when I get picked up or handled roughly. Instead of being fast with my claws, I simply walk away and play somewhere else if things get too rugged for my taste.

Oh, and I also get along easily with other pets and won’t mind having their company when my humans are away.

Our lineage hails from the Arabuko-Sokoke Forest Preserve, right in the heart of Kenya’s coastal zone, located between the regions of Malindi and Kilifi, the territory of the Giriama tribe. We are a naturally occurring breed and have been thriving in the forest for as long as the natives of the area can remember.

The native Giriamas call us Khadzonzos in the local dialect, which translates to “pretty one” and have been living with my ancestors for a very long time. But despite our history together, there is no available timeline for how we came to be as a breed or how we proliferated so well in the forests.

Very little is actually known about the history of my breed before we became well-known in the world of cat fancy so the exact details of my roots remains quite a mystery.

What we do know for sure is that the Sokoke breed started to gain popularity in 1978 when a horse breeder by the name of Jeni Slater came across a litter of wild-looking kittens on her coconut plantation in the proximity of what is now the Arabuko-Sokoke Forest Preserve. Slater decided to keep two of them, a male and a female, as pets when she noticed that their coats were very luxurious and fascinatingly-patterned.

Much to Slater’s surprise, the kittens were rather docile when they got older and acted very much like domestic cats instead of being savage. The cats eventually mated when they became of age and successfully produced a litter. Gloria Moeldrup, one of Slater’s friends and a cat fancier, fell in love with the kittens and asked to bring two of them back home to Denmark in 1984 to set up an experimental breeding program.

Several more Sokoke kittens have been imported to various places since then, particularly the Netherlands and Italy, which subsequently established the “Old Line” foundation of Sokokes. Our breed was officially recognized by the Federation Internationale Feline (FIFe) in 1994 and granted our Championship status soon after.

I should also mention that Jeannie Knocker, a British-Kenyan living in the Watamu region, an area that’s not far from Jeni Slater’s property, managed to get hold of Sokokes sporting coats that were slightly different in terms of coloration. Rather than being predominantly rich brown or chestnut, they also had splashes of grey and silver on their coats. These cats are known as the “New Line” of Sokokes and were also duly recognized by TICA. They were given their Preliminary breed status in 2008.

It doesn’t take a lot to keep me as healthy. Coming from a wildcat lineage, I am quite hardy against diseases and won’t need more than just a weekly careful grooming to maintain my coat’s luster and smoothness.

Moreover, I don’t require any special diet and will happily eat anything that any other pedigreed feline would feast on.