How To Keep Cats Off Furniture 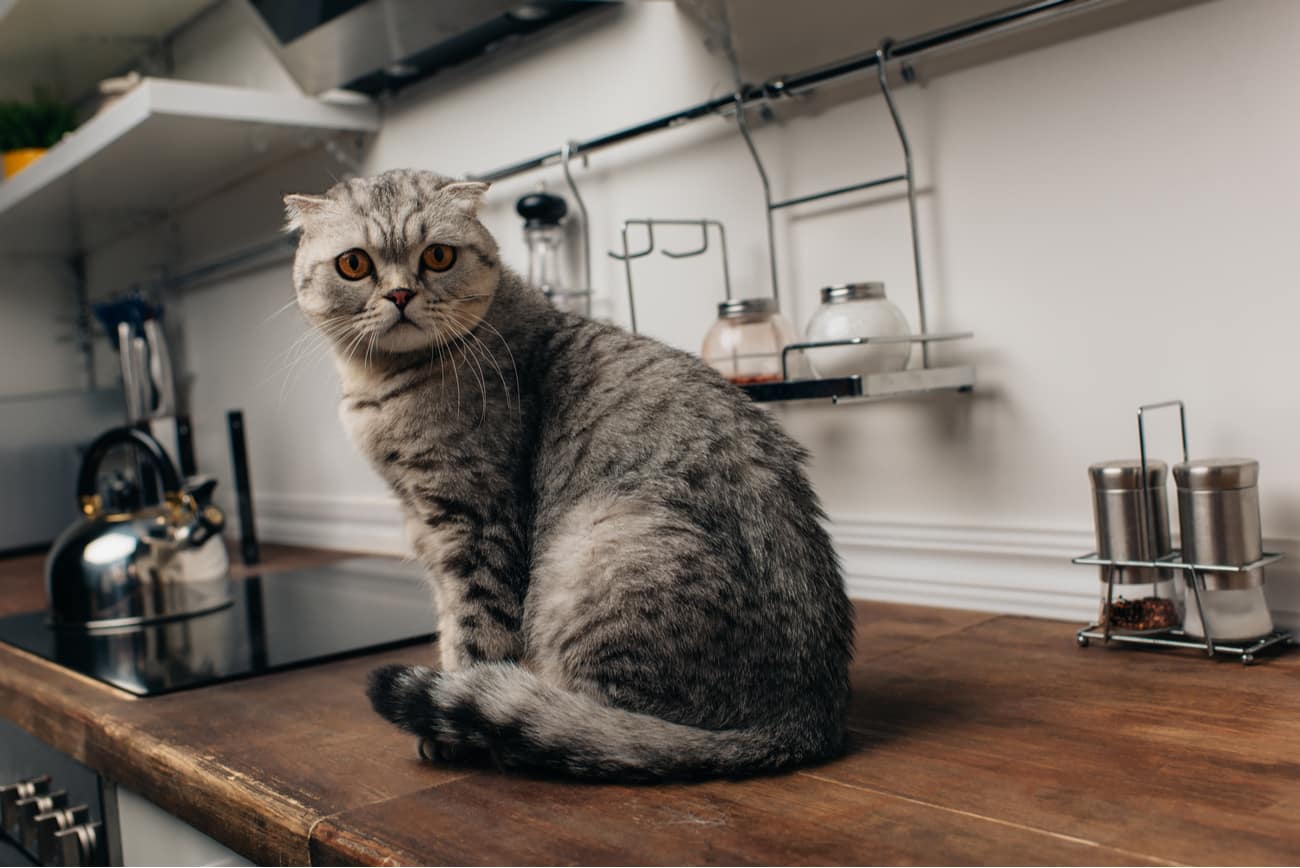 30 Apr How To Keep Cats Off Furniture

Posted at 17:43h in Cat Training by Caitlin 5 Comments
0 Likes

Introduction: How To Keep Cats Off Furniture

If you’re a cat owner, then you’ll be all too familiar with the huge problem of trying to educate your furry friend in matters of domestic feng shui and getting the message through that your home is not a climbing frame.

If you’re not a cat owner, then think yourself lucky that you can leave glasses of liquid on any surface you want? no heart palpitations or sweaty hands when you see the approach of a furry tail, bee-lining for your coffee, like a shark fin through the waves.

We don’t have to live like this, though. Help is at hand! We can reclaim our tables and countertops in a very simple way by altering the landscape.

If repeated warnings have been rendered useless, then it’s time to get down to business. This means changing or altering the environment itself to put your cat off exploring them in the first place.

This doesn’t, necessarily, mean you have to turn your home into an Indiana Jones-esque booby-trapped cavern. Although, watching your kitty flee from a polystyrene boulder could be hours of fun.

Instead, you can make use of the various smells, textures, tastes and, to a certain degree, sounds that cats find off-putting. No stress, no mess – all you’ve got to do is round up a bunch of things cats hate and make it part of your arsenal to keep your kitty off counters and furniture.

Let’s start with the scents that cats hate…

What Smells Do Cats Hate?

Here’s the first thing you need to know about using scents: your sense of smell is absolutely no match for that of your cat’s (your feline friends nose is about 40 times as sensitive), so it’s high time you used this against him when he just won’t shift from your dinner place.

Most of these cat-offensive smells are palatable to humans, such as:

Think citrus fruits, juices, tinctures or oils such as lemons, limes and oranges. Fortunately, lemon and citrus scented goods are fairly common, so it should be a fairly simple process to strategically administer the smell in particular areas.

Bonus points if the area you’re trying to prohibit is outside, as you can leave discarded orange peels or lemon rinds out in the open!

Although not quite what we’d immediately think of when we imagine tangy or strong scented fruits (such as the citrus variety), cats seem to have a natural aversion to the scent of banana. Another lucky crossover, really, who among us humans can say they don’t love the smell of banana

Oh, you don’t? Listen, I’m sorry you had to find out this way, but you’re actually part cat. The fur didn’t give it away

A great number of natural oils are unbearable in smell, to the humble domestic kitty. This can be anything from lavender and peppermint to things a little more exotic like wintergreen oil or geranium.

Be wary of some stronger scents such as peppers, chilies or particular plants that could cause worrisome symptoms such as Eucalyptus. The aim is to politely shoo-away your cat, not to poison him or knock him out.

These smells that repel cats should do a good job of discouraging your cat away from specific areas, but in case you need a little extra repellent, you’ll be interested to know that there are certain textures cats hate as well…

What Textures Do Cats Hate?

If smells simply aren’t doing it, then it might be time to look at the very fabric of the environment itself. There are a handful of textures that really great with the common cat, such as:

Another cross-pollination between man and cat. Aluminum foil. Horrendous stuff. Ever accidentally bite into it? My god.

Cats seem to have a similar reaction whenever they’re forced to walk across it. Perhaps due to the weird, crinkly, metallic nature of the stuff or maybe because it rips up too easily beneath them that it doesn’t offer a decent scratching opportunity.
Whatever the reason, it’s cheap and easy to spread across a flat surface whenever the need arises!

Your cat will treat anything sticking to his paw the same way you would if you were caught trailing toilet paper on your heel, try to pass it off as an intentional joke in front of your friends, scream internally and then shake it off like your life depended on it.

For this reason, cats detest sinking their paws onto anything that’ll stick to them. Double-sided, sticky materials can be purchased fairly readily from pet-stores meaning you don’t have to get creative like Macaulay Culkin.

If scratching is your main problem, rather than the actual trampling exploration of the cat itself; then plastic might be your savior. Cats will get bored, very quickly, of any material or surface that they can’t sink their claws into and give a good scratching.

Smooth plastic surfaces or coverings should work well to avoid any future damages by way of kitty claw. There are a wide range of plastic furniture protectors that do a great job of latching onto the most scratchable parts of your furniture, so you’ll want to check those out.

Of course, simply installing a scratching post in various parts of your home might serve as a much more attractive offer than your sofa.

A gamble: some pet owners swear by using loose coverings and fabrics as a textual deterrent ? similar in principle to the aluminum and the plastic; when cats find they can’t get a good grip on it, they tend to get bored and wander off. However! Other pet owners also claim that if the cat gets under the loose fabric, it can have a field day with its claws? risk vs reward, I guess. It might work for you.

What Tastes Do Cats Hate?

It’s easy enough to coat your furniture with plastic protectors and cover your countertops in foil, but what about those houseplants that kitty keeps biting into? It’s not like you could wrap them up in aluminum foil.

When it comes to things you wish your cat would stop nibbling on, tastes might be your next best move.

Similar idea to the scents; your cat might have an exploratory nibble of something before bolting in the opposite direction. Here’s the line-up of cat-repelling tastes:

Yep, you guessed it, citric fruits are back. If the scents don’t seem to be working, then why not try the actual fruits themselves? You could leave small samples of the fruits in particular areas, or simply use the taste in conjunction with the smell i.e. feed him a little bit of that nasty lemon before spraying lemon scents on the furniture.

Spicy-ish foods are a big turnoff for cats, too. Although, ideally you don’t want to be smearing sticky sauces all over your furniture unless that’s what you’re into, in which case keep reading on.

Be careful, however; don’t go too hot or too spicy, you don’t want any em extra mess to clean up later.

Be wary of onions, garlic and aloe as these have been known to cause some upsetting symptoms for cats, such as anemia, diarrhea and, believe it or not, depression.

What Sounds Do Cats Hate?

Finally, we arrive at sounds. The last bastion of a tired cat owner! If nothing else is working, you might want to resort to these noises’ cats hate…

Cats are notoriously averse to whistling sounds. It’s thought that this, too, is an instinctual thing and reminds them of birds of prey. A short, sharp, whistle as a warning when they’re approaching that forbidden location might just do the trick.

A handful of loose change (or some coins in a bag/can for example) can also elicit a quick flight response. Don’t overdo it, though, as this can become quite a frightening experience for the little feline.

An excellent idea for location-aversion is to setup noisy little obstacles or traps, such as empty cans piled precariously or a hidden squeaky toy that your cat will accidentally trigger. The aim is for the detracting noise to be sudden and alarming, plus if your cat sets the noise off himself then he’s less likely to begin association the negative feelings with you personally.

Don’t go overboard. Remember that cats can be very sensitive, anxious creatures. You don’t want to scare them or lose their trust with constant, loud, obnoxious noise. It’s as much their home as it is yours!