How to Discipline a Cat…Yes, it can be done! 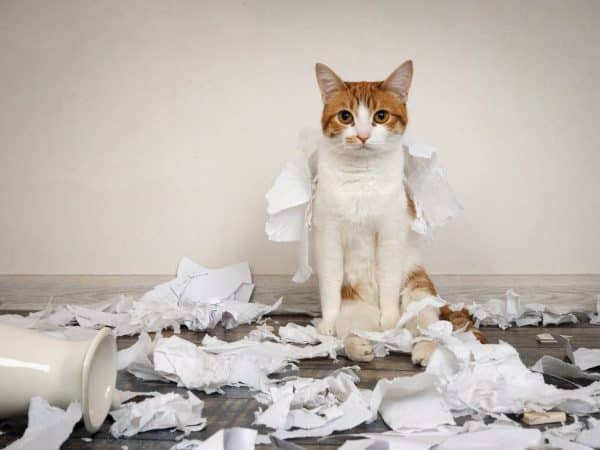 30 Apr How to Discipline a Cat…Yes, it can be done!

Posted at 19:32h in Cat Training by Caitlin 0 Comments
0 Likes

It’s the age old question, how to discipline a cat. And the very thought of it might cause sleepless nights (either because you’re a loving owner who can’t stand the thought of disciplining your cat, or because you’re terrified of the battle that will commence when you do); but there’s no denying that sometimes a naughty cat has to be told.

It’s been briefly highlighted in past articles, but the concept of disciplining your cat really needs to be discussed in-depth to avoid any unpleasantness or causing any further issues. So, before you run that extra-bubbly punishment bath, take a read through our guide on feline behavior.

The first and, probably, most important part of preparing for disciplining your cat is to remember that your pet is different from your neighbor s. Now, it might seem a little rich or contradictory for me to tell you this: but resorting to catch-all guides should not be your main focus.

Sure, there are some general methods and techniques discussed further in that are successful for the most part, across the board. But you can’t pigeonhole your cat into a list of behaviors lifted from an article, your furry friend has his/her own personality, fears, anxieties, tastes, dislikes and so on.

Get to know these first and foremost; only then can you have a solid foundation on which to build some discipline where necessary.

Start by figuring out what your cat loves. A particular kind of snack or treat? A specific toy that she plays with every day?

Whatever it is that your cat adores; this will become your main tool for altering their behavior in different ways. We’ll come back to this further in.

For the sake of discussion, we often break down the relationship as simply Pet and Owner. Although this is technically true, it doesn’t accurately describe the dynamic between you both. There’s a very special, loving bond between you and your cat (or any pet for that matter) that can’t really be put into words, and it’s this very bond that can make or break your cat’s behavior.

If she feels unloved, neglected or as if you’re angry, then your cat might exhibit upsetting behavior or throw little temper tantrums. On the flipside, if the trust or respect was never there to begin with, then it’s unlikely that your cat will pay attention when you try and discipline her.

It’s important that you establish this loving, two-way relationship early on. Show affection, attention and time. It will make everything so much easier.

Your cat is a living, complex being with a wealth of different emotions flowing through it, again, it can be easy to forget this, and instead resign our pets to nothing more than cuddly company.

As such, it’s important that you actually differentiate between behaviors and recognize these tumultuous emotions as best you can.

For example, if you find your cat is constantly avoiding her litter box in favor of some other location around the house? (and yes, it’s a universal law that this other place will be the cleanest, most expensive, fanciest part of your home) don’t immediately get angry and assume it’s bad behavior. There may be some anxiety or fear at play.

There might be a very good reason for her to avoid the litter box or its environment. Never jump to conclusions! Always take your time.

So, how do you discipline a cat

Let’s take all of the above for granted and assume you have a fantastic relationship with your resident mouse-catcher, but that she still seems to be acting like a moody teenager most days. What do you do, now.

Punishments such as these are very likely to cause your cat stress, anxiety and fear for a number of reasons: first off, they don’t know what they’ve done wrong. They can’t understand our social cues or etiquette. Why shouldn’t they pee on that sofa? Cats are also very emotionally sensitive creatures, prone to anxiety in and of itself; by adding negative punishments onto their emotional load, you’re likely to only exacerbate the problem and make life miserable for the poor little soul.

So to properly discipline your cat, drop the idea of negative punishments and adopt the principle of positive discipline, which essentially boils down to rewarding good behavior over the bad.

How to reward good behavior

How best to reward them? The usual ways!

As mentioned above, once you’ve found your cat’s particular motivation (favorite treat or toy, for example) then you have a very powerful weapon in your hands. However, the fur ball will do anything for its favorite snack. Anything. Thus, it’s important that you only reward her when she behaves well.

One of the reasons that shouting doesn’t work as a form of punishment (aside from just being cruel) is that the cat doesn’t have a bloody clue what you’re on about. You could be speaking in tongues for all she knows. To her it’s vocal attention, so it must be good. On the flipside, this vocal attention can be reward in and of itself, when she does something good.

Petting, rubbing, stroking, playing, you already know your cat loves this, so use it strategically! Waiting patiently whilst you get her food? Hug. Knocking a mug of tea all over your keyboard? No hug.

But that brings us on to the next dilemma

How to punish bad behavior

So if you can’t punish her, what do you do when she misbehaves

The most productive and healthy approach to punishing your cat is essentially the polar opposite of positive rewards. Say she bites or scratches you for no reason; the impulsive reaction might be to swat her paw away, or shout a little warning.

This isn’t productive ? instead

Simply ignore her. Maybe even get up and walk away, giving absolutely zero credence or attention to her bad behavior. Over time, she will come to realize that particular actions on her part result in being ignored by her owner, and the lesson will sink in.

It’s not always practical to leave the room or walk away, but as long as you exhibit some sign of intentional (temporary) neglect, such as complete silence. Remember, most vocal cues will be seen as a positive so the message should be loud and clear.

Always remain consistent in your discipline! The only way our pets learn anything is by constant reinforcement; just the same as training tricks takes time and patience. It can be difficult to keep up a disciplinary demeanor sometimes, but it’ll pay off in the long run.

And don’t give into those manipulative meows! Your cat knows exactly what it’s doing. It’s a battle of wills. Are you really going to lose out to someone who licks their own private parts?

And that’s it: healthy, productive cat discipline boils down to strategic rewards, an iron will to ignore bad behavior and the conviction to stick to your guns. Good luck!