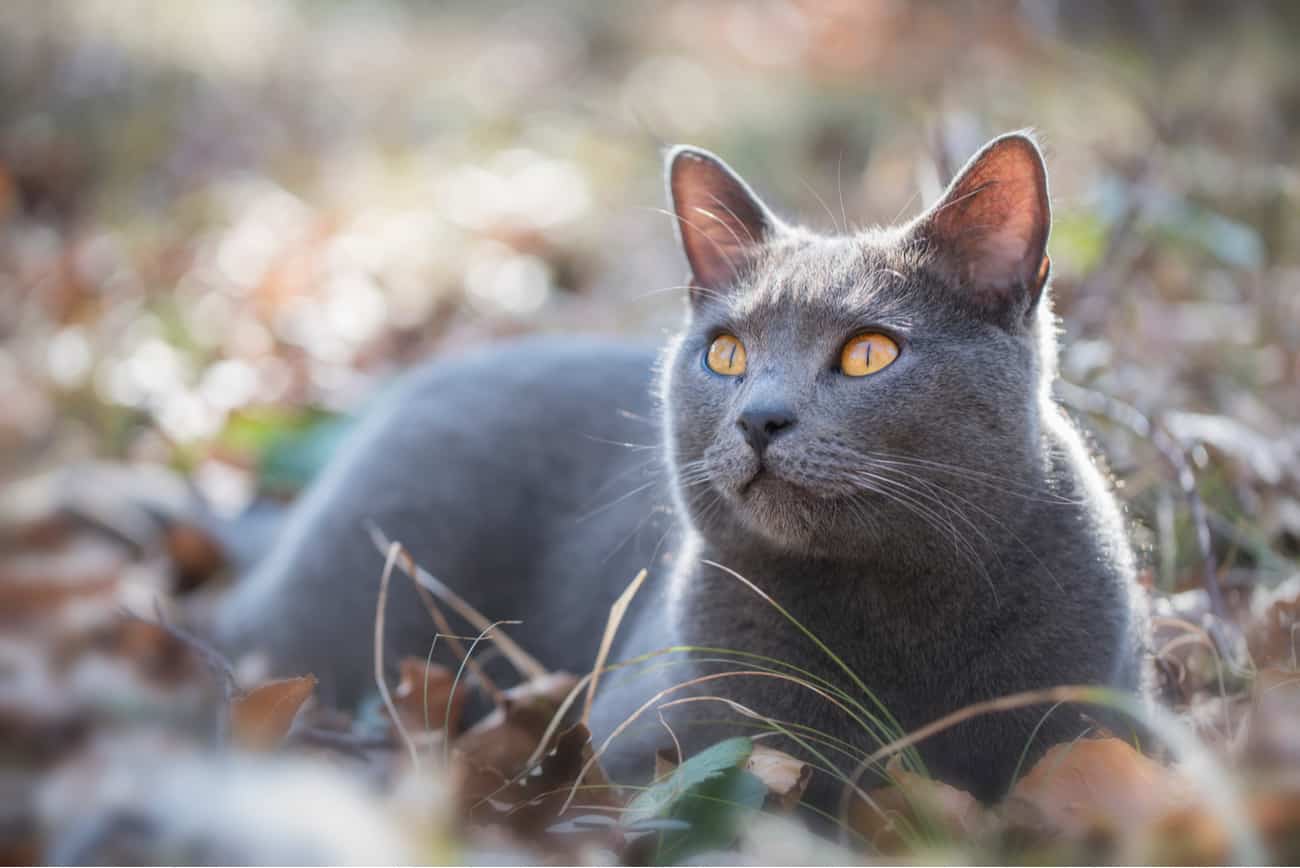 For starters, I flaunt a stocky body that tapers down to noticeably wiry legs with round paws. This is the reason cat aficionados have dubbed me a “potato on toothpicks”. However, don’t let my appearance deceive you. I am a very agile cat with the ability to move in a flash.

My head is fairly round with a strong jawline and my full cheeks are framed in an upward slope, making me look like I have a perennial half-smile on my face. I also sport a straight nose and small muzzle that make me look rather refined.

I have round eyes that come in striking hues of gold, copper and orange. I’ve heard that dedicated Chartreux breeders prefer a deep copper or orange tone to really wow audiences during shows.

My personal opinion is that all my eye colors look rather dazzling on me.

My coat is short to medium in length and has a woolly texture. Apart from having a cozy feel when my human companions run their fingers through it, it’s also got a uniquely striking visual appeal. It comes in distinct blue, gray and silver shades, with a long top coat and an undercoat that’s quite resilient to the touch. One awesome feature about my coat is its ability to repel water due to its length and thickness.

Let me start things off by saying that I am an avid climbing buff. I can scale cabinets and other high spots almost effortlessly. This is the reason why I love having lots of perches to clamber to the top of in and around the home. I also appreciate having a windowsill to sleep and chill out on most of the day.

Although my overall facial expression may be somewhat jovial, I have the blood of a skilled hunter running through my veins. Akin to my distant cousins in the wild, I am a master of quick, short bursts of speed. If you want to witness this, get me a toy – I’ll stalk and pounce faster than you can say sic him.

But I’m not all violence and aggression. I’m a friendly feline who finds it easy to socialize with humans and other animals. Unlike other breeds that can be a bit reserved and grumpy, I am never hostile even when being roughhoused and will simply choose to walk away instead of showing aggression. This is perhaps the biggest reason why I am so popular with parents with younger children and multi-pet households. Now while I am a cat that will never shy away from attention and loves to be petted, I am not fond of being picked up. If you want to show me some lovin’, give me a belly rub or a gentle pat on the head. Just don’t try to lift me up, I prefer to have all of my paws on the floor.

Compared to some of the nosier felines – I’m looking at you, Donskoy – I value privacy and I’ll respect your boundaries. This means no following you around the house or other stalker-like behavior.

I, of course, do notice you and whatever you’re doing around the house but I’m more inclined to give you an appreciate head bump and be on my way rather than nosy my way through your business.

That’s just how I roll.

And on this vein, I should mention that I don’t have a problem being alone. Solitude suits me. As long as I have some fun toys to play with and a good spot to perch on, I’m a happy camper.

Oh, and an extra bonus? I’m an excellent – seriously, top-notch – mouser. If you gots a problem, let me know and I’ll take care of it. That’s what friends are for, right

I’m a well-behaved, cultured and refined sort of feline.

As such, first time cat owners don’t find me too demanding to take care of and parents with young kids and other pets appreciate my amiability and graciousness. I am even suitable for individuals living alone and seniors looking for a companion cat.

I get along with pretty much everyone.

That being said, there are some must-haves I should clarify. First, I need a lot of climbing spots. If your entire house is bedecked in very low, very minimal modern furniture – don’t expect me to live in it.

Second, I don’t like being picked up. And finally, I am extremely sensitive and can be tad grumpy when scolded. The last one’s a negative quirk that I have, but I think you should know about it.

Some geneticists theorize that my ancestors started out as mountain cats in Ancient Syria in the 13th century. According to historic records, some of them were brought back to France by Crusaders who decided to abandon their warrior ways and become members of the Carthusian monastic order.

Due to my ancestors’ exceptional mousing abilities, the Carthusian monks bred them profusely to keep the monasteries free of unwanted pests. Some traditional texts in the 18th century even emphasize that the name “Chartreux ” is possibly based from the Chartreuse liquors that the monks were popularly known to brew.

My ancestors began to grow in number sometime in the 20th century and pretty soon, it wasn’t uncommon to see natural colonies of Chartreux cats in and around Paris. And it wasn’t long before enterprising individuals caught us to be sold as mousers in homes and factories. Or more cruelly, hunted us for our magnificent pelts. And then World War I and II happened, decimating the Chartreux population, save for a few specimens that managed to squeeze in bomb shelters. If it wasn’t for the efforts of dedicated European cat aficionados, my breed would have been completely lost today. My ancestors have had to be paired with Persians, Russian Blues and British Shorthairs just to keep our bloodlines active.

The very first of us arrived in the the United States in 1971 and became an instant hit with dedicated breeders. The most notable of these are John and Helen Gamon, who worked really hard to make our breed flourish in the US. ‘Though we’re originally a French breed, the North American Chartreux bloodline is known to be one of the purest breeding lines of Chartreux these days thanks to the efforts of these dedicated breeders. Kudos, guys.

My breed was officially given a championship status by the Cat Fanciers Association (CFA) in 1987.

Overall, I’m a hardy breed that hardly needs any special requirements to stay healthy and happy. I am, hoever, vulnerable to a certain medical condition called medial patella luxation.

Don’t worry – it’s not as serious as it sounds. Just a trick knee. I can’t believe I’m saying this, but I’ll need an occasional examination by the local vet to make sure it doesn’t hamper my lifestyle.