Posted at 08:27h in Cat Breeds by Caitlin 0 Comments
0 Likes

My look can only be described as regal. My head is noticeably triangular in shape and complemented by a long nose that runs straight down my face. My tall, pointy ears flare upwards and my almond-shaped eyes have an intriguing bright blue sparkle to them.

My svelte physique closely resembles that of my cousin, the Siamese. My body is fairly tubular and lean, giving it a graceful appearance. Now while I may look like a lightweight, I m actually very well-muscled and sport fine, strong bones that give me the distinctive finesse that my breed is known for.
My shoulders and hips are very slender and willowy. This sleekness continues to my legs, which tapers down to wiry feet and round, dainty paws that prominently display my thick knuckles.

Interestingly, my front legs are shorter than the hind ones, giving me the look of always getting ready for a pounce.

I wear my coat short and it’s very fine in texture. It lies very close to my body and can come in a variety of shades, namely tortoiseshell, seal, blue, tabby, lilac, cream, red and chocolate. These colors also tend to be very prominent in specific areas of my body like my face, tail, legs and ears. They call this coloring “points” in the world of cat fancy, just so you know.

I am one chatty cat. Some say I’m one of the most vocal breeds in all the feline world and I have to agree. For me, conversation is the key to connection, which is why I always try to engage my humans in long-winded discussions ’bout life, love, and everything in between. 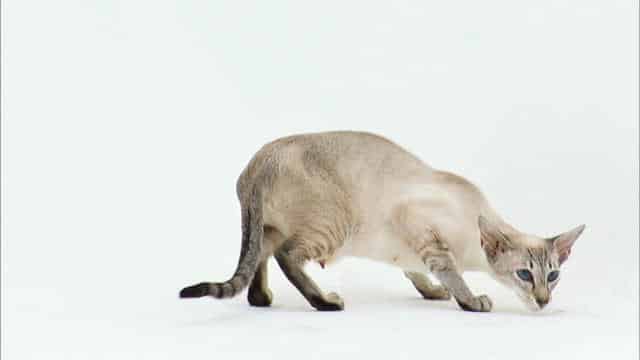 You don’t always get my points, but I understand – after all, you haven’t lived as many lives as I have.

Apart from regular conversation, I also like to be constantly noticed and petted. And I’m not above asking for the attention I deserve!

If I’m in the mood for some lovin’, I might just follow my humans around ’til I get a few vigorous belly rubs and a gentle pat or two on my head.

Akin to my cousin, the Siamese cat breed, I won’t hesitate to give a hearty caterwauling if ignored or isolated. But at least I’m nice enough to first show my displeasure through raspy growls before I move on to full-on, banshee-like howling.

Once that begins, you really need to pet me. Like, stat. I’ll of course reciprocate with head bumps and tender paw strokes.

My affectionate nature also extends to other animals. I just like company, you know? So if you’re going to be out for most of the day, it’s a smart idea to get me a companion or two. I get on really well with other Colorpoint Shorthairs and I also don’t have any problems getting chummy with cat-friendly dogs.

Now while I am a very affectionate feline, I’m not so fond of the little ones. 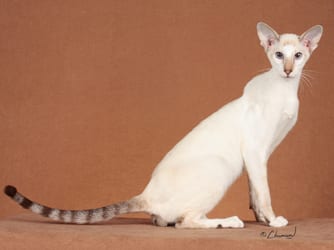 Some felines, like that docile Persian, will let children do all sorts of things to him – he even puts up with tea parties! That’s much too indulgent behavior, methinks.

Don’t get me wrong – I have nothing against children. The gentle, patient ones are fine by me. But I’m not as tolerant and patient compared to some other felines. Let’s just say this: if they try to roughhouse with me, I’ll roughhouse right back. With my claws.

Despite my overall sociability, I am also wary of strangers. So don’t be surprised if I spend all my time hiding whenever you have guests.

The last thing you should know about my personality is that I am a cat of contradictions. Case in point: I am highly intelligent and can easily learn a trick or two, but I’m prone to bouts of stubbornness and may suddenly refuse to participate in fetch or similar interactive games ‘though I’m fully aware of how they work.

You might get frustrated as you find yourself repeating the same instructions over and over again just to get me to focus, but remember that it’s just my nature, okay? I’ll come back to playing once I’m ready.

My ideal human is one who doesn’t mind listening to a very vocal cat most of the day (and/or night). I am very talkative and will even try to get a conversation going when my guardian is focused on some other activity like watching TV or doing the laundry.

I also prefer humans who don’t mind being followed around constantly. I like to stick to my guardian just to see what he or she is up to most of the time. And of course, as I shadow you, I’ll be chattering in throaty coos and trills, sharing my opinions on various things in and around the household. I have a lot to say, you know.

At its simplest, my breed basically comes from the same lineage as that of the Siamese. I am the result of the efforts of a few dedicated American and British cat aficionados during the 1940’s and 1950’s who wanted to develop a Siamese hybrid that sported a red coat.

These cat fanciers began with Siamese foundations and out-crossed them to American Shorthairs and Abyssinians. Bit by bit, the characteristics that they’ve hoped to achieve started to show up and have created what is essentially a cat that has the physical characteristics of a Siamese, but flaunts different coat colors and markings.

Now while they are entirely different felines, cat registry associations still recognized the pioneering Colorpoint Shorthairs as Siamese, which caused quite a controversy. To alleviate the issue, a move to give these felines a new name and a separate breed was pushed.

They’ll come around in time.

Cat buffs looking to have me as a pet should put regular play and bonding on top of their checklist when it comes to keeping me as happy and healthy as possible. My preferred spot is the spotlight and I won’t hesitate to let you know that I am not happy when I feel ignored.

I only need a meticulous grooming once or twice a week to keep my coat shiny. Interestingly, I don’t produce as much dander compared to other breeds and am considered as one of the more hypoallergenic cats in the feline world.

Now while I belong to a breed that’s generally resilient against diseases, I need to have a lot of protein in my diet to prevent me from getting bloated. Some of my family members are also prone to dilated cardiomyopathy and liver amyloidosis, which makes regular visits to the vet every five to six months a priority.