The Egyptian Mau is a rare, small to medium size cat and is best known for it’s very striking coat. They are one of only a few domesticated breeds that have naturally spotted fur, which comes in silver, blue, smoke, black, bronze and pale gray. 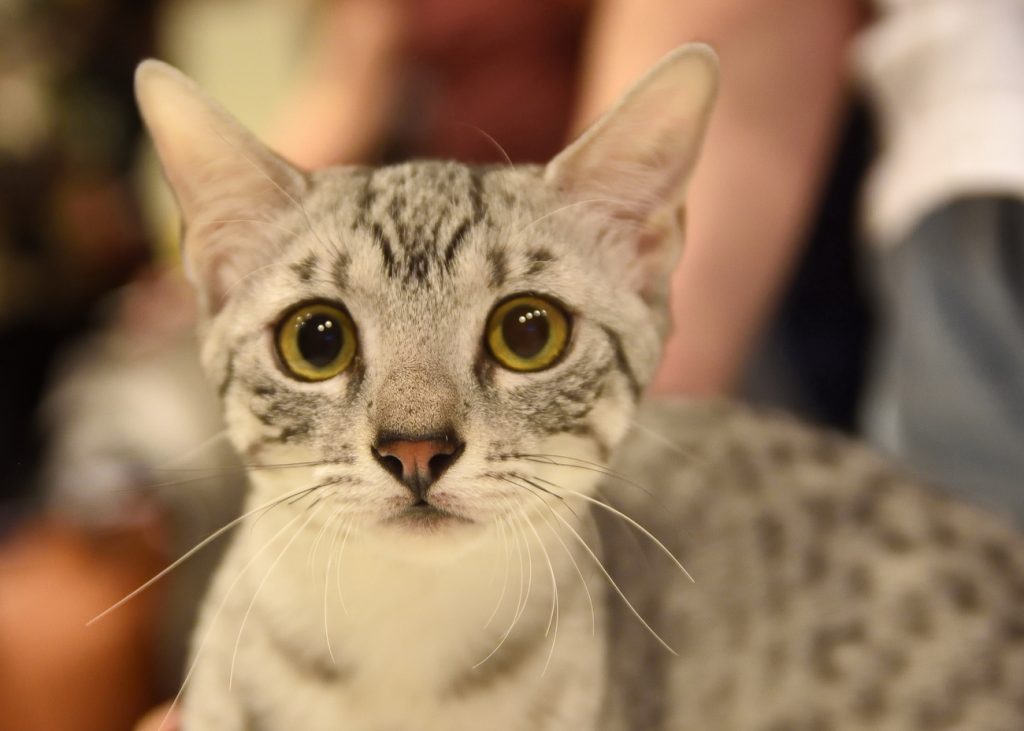 Breed: Egyptian Mau cat
Size: Medium, 6 to 12 lbs
Energy Level: 5/5
Talkative: 3/5
Coat: Medium length, very fine and has a silky texture.
Hypoallergenic: No
Seeking: Someone to give me all their attention and affection.
Child Friendly: Yes
Personality Snapshot: Affectionate and playful, loves climbing and jumping, extremely smart, not fond of strangers and other pets.

Now while I am not the only spotted cat in the feline world, my coat can be easily distinguished by its unique bands and patterns. And interesting, my spots only occur on the tips of my coat hairs.

Although my overall physique is medium in size, I am very well-developed and muscular. My chest is broad and my legs are stocky, yet still very much in proportion to my body.

One notable feature I have is the extra flap of skin that lines the posterior end of my ribcage all the way to my hind leg. This gives me a surprising amount of power to launch myself into the air or break into a quick dash. 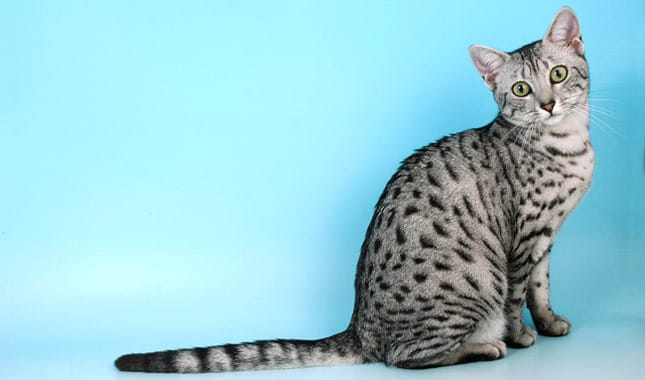 Of course, the fact that my hind legs are noticeably longer than the front ones helps, too. as does the fact that I possess thick paw pads that cushion even the trickiest landings from jumps and climbs.

As for my face, I boast a strong chin and a small mouth that always appears to be slightly frowning. In contrast, my almond-shaped eyes are considered by cat fanciers as one of the most beautiful and expressive in the feline world. Apart from having eyes of a vivid gooseberry green shade, I also have a brow line that gives me a characteristically pensive appearance.

My pointy ears are neither too small nor too large and stick out like antennas on top of my head. Between them lies another unique physical attribute that can only be found in my breed: the mark of the scarab. Although it may sound rather enigmatic, it’s just a pattern shaped like the letter “M” that is prominently displayed on my forehead.

I’m a very versatile feline. I can be an indoor cat but I can live just as happily outdoors. I possess excellent hunting abilities so if you let me out, you can even expect a treat or two.

If you choose to keep me indoors, you’ll notice that I’m really fond of interaction and love to spend most of my time with my humans. It starts from early in the morning, when I’ll wake you up by jumping on the bed and nuzzling your head and feet and then I’ll probably spend the rest of the day following you around. 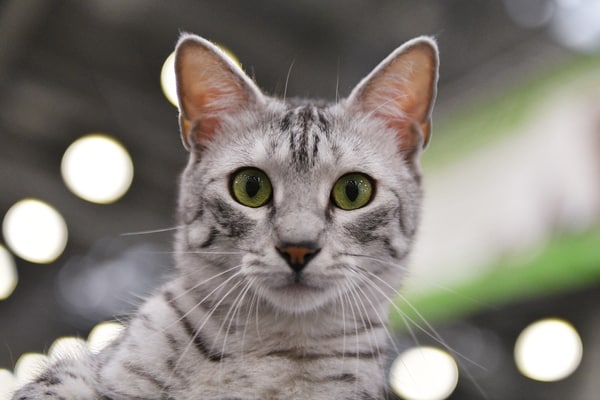 As affectionate as I am though, keep in mind that I prefer my legs remain on firm ground. The moment you pick me up, I’ll be fidgeting to escape.

Of course, this doesn’t apply when I’m jumping or climbing, which coincidentally are two of my favorite activities. I am a very agile feline and can easily launch myself into the air as well as scale high spots in the household. I also love to perch on cabinets and refrigerators and can be seen hogging the windowsill especially when the day is sunny and warm.

I am also very keen on running. Depending on my mood, I can either break into a quick dash or perhaps a more relaxed jog whenever I feel the need to give my muscular legs a workout. I am even known to engage my humans in a playful race from time to time. 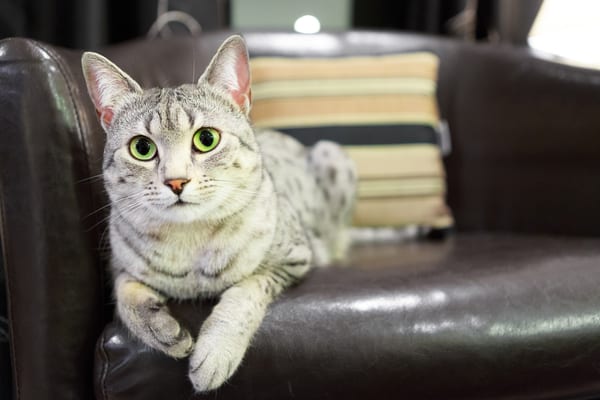 It’s actually a good thing I work out so much since I have a very hearty appetite. I just love food and you’ll have to keep a close watch over my portions ’cause I have the tendency to eat even when I really don’t need to.

Oh, and don’t forget to stash away my food where I can’t reach since as a highly clever cat, I can and will ingeniously sneak a treat or two if the opportunity presents itself.

Speaking of my smarts, I can use my intelligence for good as well – if you’re willing to put in the time, I can master tricks like fetch. Pretty cool for a feline, huh

Know what else is un-feline-like about me. I have a fondness for water and can be frequently seen playing with the kitchen tap, dipping a paw in the tub or even splashing the contents of my water bowl with my tail.

One thing you should know about me is that although I am very loyal and sociable with my humans, I don’t feel that way about everybody.

To be honest, I am not that friendly to strangers and other animals that intrude on my territory. I may not attack them, but I’ll let them know they’re not welcome by acting snobbishly and hiding out ’til the intruders leave.

Active and affectionate, I’m a delight to have around…but I’m not for everyone. I have needs – affection and play time – and I also tend to get jealous so I’m really not ideal for cat lovers who don’t have a lot of time to spend with me or want to continue seeing other pets.

That being said, my high activity levels and loving nature make me purrfect for families with young children, as long as you remind the little ones not to pick me up – they could get hurt in my haste to free myself.

My lineage is thought to be one of the oldest breeds in the world of domesticated felines. Although it is still a matter of debate among various cat associations, many fanciers believe that my ancestors were the cats depicted in ancient Egyptian artworks that trace back to the era when pharaohs ruled the land. If their calculations are correct, my breed is at least 3,000 years old today.

What we do know for sure about my breed’s origins is that the mass proliferation of my breed began when the Russian princess, Nathalie Troubetskoy, was exiled in Italy in 1956. It is said that she brought along with her a trio of Egyptian Maus, composed of a bronze male and two females that sported silver coats.

It wasn’t long before the princess put up a cattery and began breeding the Egyptian Maus. Although her breeding program went really well, she suffered a major setback when the ravages of World War II nearly annihilated all of the felines she had in her care.

However, instead of allowing the lineage of the Egyptian Mau to perish, Troubetskoy started over with the remaining cats. She even imported a few specimens from Egypt and performed selective outcrossings to pick up the pace.

From the 1960’s to the 1970’s, the princess worked hard to produce as much Egyptian Mau litters as possible until she was convinced that there was enough to prevent our from dying out. Appreciation of the breed grew over time, especially in North America. Eventually, thirteen of us were shipped to the United States in the 1980’s for mass breeding and the rest is history.

For both health and happiness, I need lots of vigorous play daily. I also appreciate being showered with affection and attention as often as possible. And most importantly – I thrive best as the only pet in the household. Competition is just not my thing.

Now while I don’t require any special grooming compared to other cats, I do need to have a healthy and balanced diet to prevent me from packing on the pounds. It’s also a good idea to provide me with plenty of climbing facilities like indoor cat trees so I can have my fill of climbing and activity without nicking your furniture or breaking your valuables.