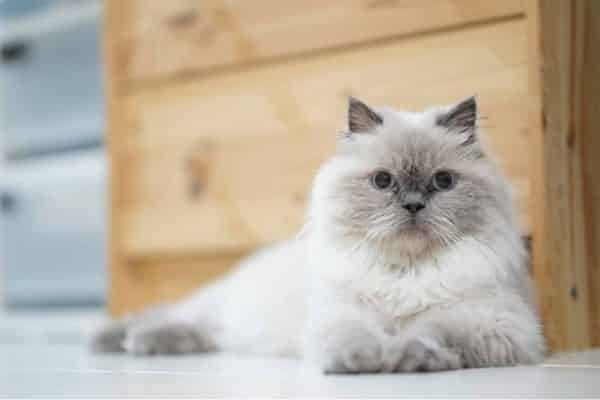 Posted at 05:32h in Cat Breeds by Caitlin 4 Comments
0 Likes

I’m known as the Himalayan, but most people would describe me as “the best of both worlds.”

That’s ’cause I’m the perfect combination of two very popular cats – the Persian cat breed and the Siamese cat breed. And of course, I’ve adopted only the most stunning features of each one.

One glance at me and you’ll see what I mean. My well-built and opulently plump physique is a dead give-away of my Persian blood. So is my adorably flat face, large oval eyes, snub nose and small ears.

Come to think of it – the majority of me most resembles my Persian side, including my luxuriously long and sinfully thick coat. The only exception is my coloring.

From my Siamese heritage, I’ve inherited glowing, sapphire blue eyes and that gorgeous point coloration the Siamese are most famous for. The overall effect? I look like a Persian wearing Siamese clothes.

And you know, it works.

The Siamese coloring on Persian fur has got to be one of the finest combinations ever concocted in cat fancy, if I do say so myself.

My coats even come in a kaleidoscope of gorgeous colors – cream, tortoiseshell, red, blue, seal, flame, lilac and chocolate – you name it, we gots it.

So if you’ve ever dreamed of a cat with Siamese markings and the generous proportions of an ample Persian – I’m your dream come true.

Much like my looks, my personality is a mix and yes, it is also the perfect combination of the breeds I come from.

From my Persian roots, I’ve inherited that easy-peasy, super laid-back persona that characterizes the breed. You’ll notice this ancestry in my impressively patient nature.

Even when I’m being pestered or handled a bit too roughly, I’m not prone to lash out with my claws. And biting is just not my thing. I’d rather find a quiet refuge away from whomever is the source of peskiness than attack. This is why I’m considered ideal for pretty much any household, even the ones with other pets and small children who might occasionally want to stuff me in a costume or make me ride around in a doll buggy – I can handle it. I get on great with seniors, too, since I’m nowhere near as demanding as other cats.

And even when I do have a demand or two, you won’t find me caterwauling all over the place.

I get my way in subtler, more refined ways. Mostly with my stare. My large blue eyes can have a hypnotic effect on humans, especially when I press hard for eye contact and add in a few beautifully melodic meows for effect.

This tactic’s never failed me yet. In fact, my easy-going, subtly persuasive Persian nature has earned me more than a few brownie points with cat lovers worldwide.

And it gets even better – unlike most Persians, I’m not all about relaxation all day long. Remember, I’ve got some Siamese in me too! You can see my Siamese blood in my high curiosity levels. The Persian in me may have me lounging, near comatose, on the windowsill for a few hours, but sooner or later, my Siamese side will take over and I’ll be by your side, meddling with whatever you’re doing around the house.


I’m also a lot more sociable than your average Persian. If you don’t come around to pay me attention, you can bet I’ll seek you out to rest on your lap or strut in front of your computer screen ’til you notice me.

And ‘though I don’t demand high-activity interaction like some felines, I do enjoy my fair share of games. You see, I don’t much care for climbing or zipping around the house performing acrobatic feats, but I am still a cat and in between napping on your lap and poking my nose in your business, I like to attack a toy mouse or two.

I’m pretty much perfect for almost any household. What can I say? I just get on with most folks.

I’m sociable and friendly without being overbearing and demanding. I’m super patient and tolerant without being a total pushover. And as far as I’m concerned – age ain’t nothin’ but a number and I get on with great with young kids as well as older folk.

As long as I have plenty of space to lounge around and a few toys to play with, I’m a happy camper.

The only thing is – I come with a lot of fur. Like, a lot. And this stuff sheds. So if you have allergies or asthma, we’re probably not meant to be.

My breed was originally conceptualized by two very smart women – Virginia Cobb of Newton Cattery and Harvard Medical School’s Dr. Clyde Keller in 1931. They wanted to produce a cat that had the physical characteristics of the Persian yet displayed the aesthetic features of the Siamese. Like I said, clever!

After methodically pairing numerous Persians and Siamese cats, they finally bred a male kitten that exhibited the features they were aiming for. They named him Newton’s Debutante who was recorded in the history of cat fancy as the very first Himalayan in existence.

Almost two decades after Newton’s Debutante, Ben Borrett, a Canadian cat breeder, wanted to refine the Himalayan breed even further by aiming to produce a longhaired feline that had noticeable colorpoints. Outcrossing the descendants of Newton’s Debutante to several long-coated cats, Borrett successfully bred kittens that matched his goal. He insisted on calling the resulting litter Colorpoint Longhairs.

Even now, of all the respected cat registries in the world, only the American Cat Fanciers Association (ACFA) accepts the Himalayan as a distinct breed.

We are clearly ahead of our time.

The most high-maintenance thing about me is my thick, lustrous coat. It is very dense, very long and it needs daily brushing and grooming in order to keep it from getting matted.

If my coat is neglected, it can lead to breakages as well as excessive dryness that can lead to serious skin problems for me.

Now while I am not as vulnerable to diseases compared to other breeds, it’s important to have regular trips to the veterinarian’s clinic every five months or so to have me checked for progressive retinal atrophy and polycystic kidney disease (PKD). It’s also a good idea to wipe my face meticulously each day to get rid of particles that may have accumulated around my eyes. Neglecting to remove these spots and specks can cause my beautiful blue eyes to become extra watery and even inflamed in the long run.

Last thing – true to my Persian ancestry, I have a slight disposition toward obesity. What can I say? I’m fond of good food and not so keen on rigorous exercise.

So it’s a good idea to play with me from time to time to get me moving. I don’t need tons of play time – I tend to get bored quite easily – but the time should be interactive or serve a purpose. You’ll see what I mean below…