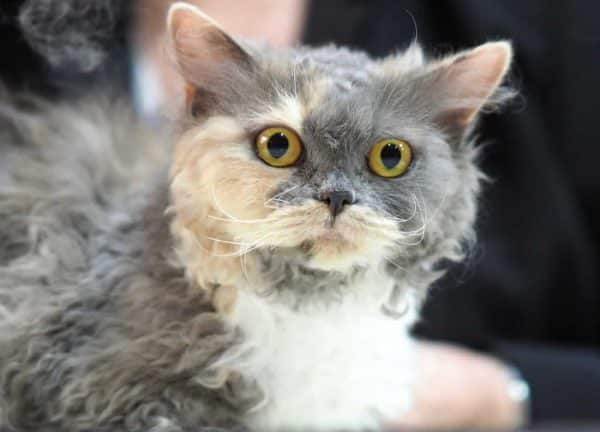 Posted at 05:18h in Cat Breeds by Caitlin 2 Comments
0 Likes

The very first thing people notice about me is my distinctly curly, wool-like coat. It gives me a rather fancy appearance, if I do say so myself. That’s ’cause not only is it curly, but it’s also extremely thick and bushy, especially on my neck, rump and tail.

Interestingly, my coat comes in two different lengths, namely short and long, which both have their very own unique characteristics.

The short one has the general appearance of a teddy bear’s coat. Besides being fairly thick and dense, it also looks as if it were floating on my body. The curls are wonderfully frenzied and unruly, and clump profusely without any bald patches.

The longer version still looks rather tousled, but tends to have a finer appearance compared to the short look since the curls are still arranged in thick, prominent ringlets, but also look very fluffy. Like sheep’s wool.
Either way, my beautifully plush, curly coat adds quite a bit of volume to my body, leading people to think I am plumper than I actually am.

And I am really not fat – I’m quite muscular.

‘Though you wouldn’t guess by looking at me. Many felines have triangular heads with sharp features which give them a more tones appearance, but my face is noticeably round.

And on top of my general roundness, I’m usually sporting fluffy, curly sideburns that make me look fleshier than I actually am. Add to that my very short chin and you can see why I look like I’m always on the verge of cracking of grin.

Complementing my plump features are my large, expressive eyes. Compared to other breeds that usually have eyes that are shaped like walnuts or almonds, mine are perfectly, mesmerizingly round.

The overall effect is stunning, I hear.

My roots are complex and the various breeds that I owe my heritage to are all reflected in my winsome personality. It’s like I’m the best of all their worlds.

Take my laid-back nature, for example. That’s totally from my British Shorthair side of the family – they’re as zen as they come, you know. From my Persian cat roots, I’ve inherited my affectionate, loving, and almost too patient nature. That’s why I’m good for families with young children, since I don’t mind being around little humans one bit. I won’t even retaliate with my claws when the play gets rough, ‘though I confess I don’t appreciate being startled or scooped up abruptly.

But I handle most things with tolerance and grace. ‘Tis just my nature.

As you’ve probably noticed by now, most of my roots trace back to some pretty inactive cat breeds. And yes, I too am known to chill out from time to time, but I am definitely not lazy.

In fact, a part of my heritage traces back to the Exotic Shorthair, one of the most adorably playful cat breeds in existence and I share his frisky nature. I just prefer more relaxed forms of frolicking, like being teased with pieces of string or working my wits with a good puzzle toy.

Strenuous physical exercise is just not my cup of tea.

Like all the cat breeds I come from, I am a sociable cat and I love the interaction and company of my humans. And not just my humans – I’ll even warm up to other humans and pets. So it goes without saying that belly rubs and appreciative scratches behind my ears should be on your daily checklist.

Oh, I guess it’s time to mention one not-so-laid-back thing about me. Yea, I can be a little bit demanding when it comes to affection. That doesn’t mean I’m a high-maintenance attention monger – like the Donskoy, for example – but I can feel sad if neglected or left alone for too long. I mention this because with my mellow personality, you might not always be aware of how I’m feeling. You see, I don’t get restless or antsy like other cats. And I’m just not the sort to take my pent-up resentment out on your furniture.

I’m not even particularly vocal and I’ll only resort to meow-ing when I really, really need to, like when my food or water bowl is empty or when I feel I am not getting the attention I need.

So schedule in regular time each day for some one on one time with me. Just a few minutes to assure me I’m the superstar of the household will do just fine.

Most humans are pretty ideal for me. Yes, I am that easy to take care of. This means I’m compatible with everyone from first time cat owners to parents of young children to seniors looking for a low-maintenance companion feline.

The one sort of human I would have little interest in is the sort of human who’s not interested in spending time with me. While I may be laid back and not as active compared to other breeds, I still need to be showered with attention even for a few minutes each day by my humans to keep me feeling happy and comfortable.

My breed came into existence in 1987, primarily through the efforts of a Persian breeder from Livingston, Montana, United States named Jeri Newman. Apart from being an avid cat fancier, Newman was also constantly on the lookout for felines who displayed unusual physical characteristics. She even asked her family and friends to keep an eye out for them, too.

One day, a friend informed her about a female kitten in an animal shelter sporting unruly curls that were out of the ordinary. Interestingly, it was born out of a litter of six and its siblings had the usual straight coats. Newman adopted the kitten and named her Miss DePesto.

When Miss DePesto turned a year and two months old, Newman paired her with a black Persian named Ch. Photo Finish of Deekay just to find out if she would produce kittens that had curly coats like hers. This gave her the notion that the gene responsible for the unusual coats was dominant, unlike in the case of Cornish or Devon Rexes where the gene was recessive. Just to make things even more interesting, Miss DePesto also carried genetic makeup for a pointed coat and long hair, which manifested in her subsequent litters.

With the help of her fellow fanciers, Newman soon integrated Exotic Shorthairs, American Shorthairs and British Shorthairs in her breeding program to develop the juvenile breed even more. She chose the name “Selkirk Rex” to pay homage to her stepfather and as a nod to other curly-haired breeds.

My coat may look unruly and in need of a good, thorough combing but trust me when I say a little goes a long way. Brushing my hair too much can relax my curls and ruin my unique coat.

And nobody wants that.