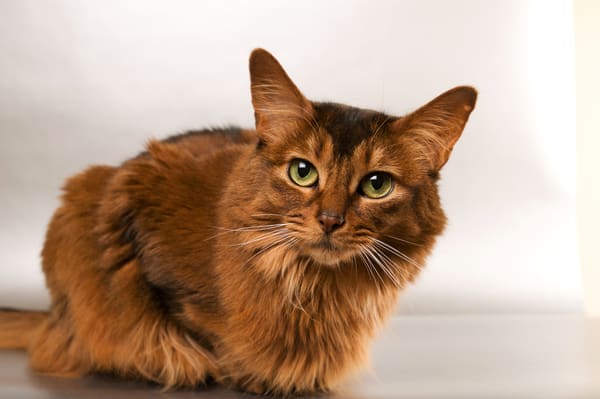 Posted at 04:09h in Cat Breeds by Caitlin 2 Comments
0 Likes

In case you’re still searching for the answer to the most philosophically perplexing question of the 21st century – “What does the fox say “ – I’m going to fill you in.

And it even purrs sometimes. But only because it is not a fox, it’s actually me, the beautiful Somali who is so vibrantly-colored and so bushy-tailed that she is often mistaken for a fox.

Which is funny, since I don’t even know any foxes. The very first of my breed actually appeared in the litters of Abyssinians as long-haired kittens.

A generous gift from the cat gods to those who adore the spectacular beauty and athletic agility of the Abyssinian but wish they had more hair.

Well, wishes apparently do come true ’cause here I am, endowed with all the virtues of the Abyssinian plus a gorgeous, thick and luxurious, semi-long coat complete with the distinctive ticked markings Abyssinians are so famous for.

I’ve even got the Aby’s regal posture and that lovely arched back that gives the appearance of being set to pounce at a moment’s notice. My overall physique is as well-balanced and athletic as the Abyssinian’s as well, except I have the added elegance of luxurious fur proudly accentuating my neck and the sides of my cheeks like I’m rocking a pair of abundant sideburns.

As for my eyes, they are large almonds that come in a vivid shades of gold or green and are outlined with darker lids that make me look like I’m wearing just a touch of eyeliner.

Let me start things off by saying that I am one of the most playful and active felines in the world of cat fancy. And ‘though I do appreciate chilling out from time to time, I prefer to run explorative laps around the house or chase anything that catches my attention.

Yes, I’ve got a lot of energy. And I like to spend it…on my humans. I’ve got a real thing for spending quality time with those closest to me, which means I’m going to be real close by much of the time.

Besides following you around the house to see what you’re up to, I’ll also be sprinkling your day with little gestures of my affection like gentle paw pats and kneading you all over. I hear I also give good scalp massages so if you’re lucky enough to get one – just sit back and relax.

But it’s not all hugs and affection with me. Like I said, I’m naturally active and there are times when I’m going to want to get my play on! And yes, you will have to be involved as I have a penchant for games that let me share the experience with my humans.

So if I show up carrying stuff in my mouth, know that I am initiating a round of fetch. If you want to start, just hold up something fluffy and I’ll know it’s time to show off my leaping skills.

As athletic as I am, I’m no meathead. In fact, I am a highly intelligent cat and when I’m not working my muscles, I’ll be exercising my mental prowess to investigate every nook and cranny in the house.

I’m very good at this little game so if you don’t want me to go through your stash of stuff, it’s best you get something that locks. I’ve yet to figure those out.

Oh, in case you’re wondering how I am with other humans and pets, you’ll be relieved to know that I am wonderfully sociable! Making friends is second nature for me and I’m a maverick at adapting to new situations and environments. You’re going to move us? Purrfect. I’ll settle right in, exploring all the new nooks and crannies the moment my paws touch ground.

Speaking of touching ground, I’m very partial to having all my paws on the floor.

And that’s one thing you’ll want to keep in mind – I welcome petting but I will wriggle and fidget up a storm if you try to pick me up. Tell your kids that, if you have them.

‘Though I don’t like being airborn, I am quite fond of another element: water. Aside from lounging near the sink just to have the chance to play with the running faucet, I also won’t hesitate to jump in a filled tub or join my guardians in the shower, so make sure you lock the bathroom door if you don’t want me barging in at an inconvenient time.

I am a cat that is ideal for fanciers who’ve already had experience rearing felines. Although my disposition is akin to most domestic breeds, my seemingly endless bursts of energy can be rather tough to handle by newbies just learning the ropes of cat fancy or older cat lovers looking for a more relaxed companion feline.

Since I can easily get along with other pets, I am a great choice for multi-pet households. As for kids, I may be very patient and tolerant with them, but parents should make it a point to check in on me during playtime since my unexpected zips and darts can easily startle very young children.

I’ve always been told that my breed is one of the most mysterious in the world of cat fancy with various myths and legends surrounding our origin.

One version of how my lineage took root tells that I am the product of the numerous experimental breeding programs carried out by dedicated fanciers after World War II nearly wiped out all feline populations across Europe. The destruction was so massive it was said that only a dozen purebred Abyssinians were left after the war. One of these experimental breeding programs paired Abyssinians with Russian Blues, Burmese and Siamese cats among others, which subsequently produced kittens that exhibited the overall physique of the former, but sported longer coats.

They were initially believed to be “mistakes” that had “polluted genes”, but some breeders thought they were really beautiful and nurtured them.

Another interesting theory of how my breed came to professes my ancestors were the result of a spontaneous mutation among Abyssinian cats that made their usually short coats longer and more lustrous.

To be honest, nobody really knows for sure. What we do know is that in 1953, a kitten that exhibited my physical characteristics by the name of Raby Chuffa of Selene was imported to the United States by British breeders. His family tree included Roverdale Purrkins, a female Abyssinian bred in England that had a very high probability of carrying the long-haired gene.

Raby Chuffa of Selene went on to become the male foundation of our Somali breed in and around North America in the years that followed. The first Somali cat officially shown in the United States was named Lyn Lee’s Pollyanna.

My coat may look high-maintenance, but it is actually very easy to take care of. A daily brushing is already enough to keep my coat looking nice and smooth, as well as prevent it from getting matted and extra kinky.

However, you should keep in mind to take me to the vet at least every 4 months or so for a regular check-up since I am prone to health issues like amyloidosis, a type of kidney disease, tooth decay and gum problems. Make sure you regulate my food intake as well since I have a hearty appetite and despite my active ways, I can also put on extra weight easily.