The very first thing you’ll notice about me are the unique splashes of color on my body, particularly on my head and tail. While most of me is pure white, my coat boasts smatterings of lilac, caramel, blue, black, silver and red.

These distinct splashes of color on my body are also my namesake – while ‘Van’ may sound vehicular, it’s actually the term used to describe the characteristic colorations on top of my head as well as along my tail.

Some of my relatives also flaunt these highlights in the middle of their shoulder blades.

Interestingly, the length of my coat changes depending on the season, much like the coats humans wear. I sport a light, short coat during summertime, while it becomes long and a bit thick in the winter. Both my summer and winter coats coat types are rather dense and can easily repel water, too.

Even my coat is intelligent that way. 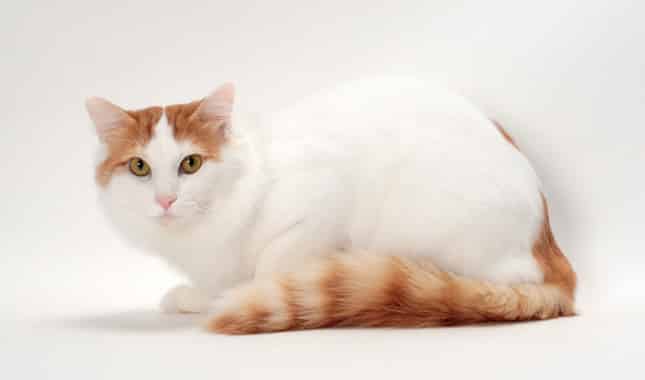 I am also prominently furry in certain areas, especially my chest, tail and in between my toes.

My body is a cross between muscular and willowy. Although I don’t look stocky at all, my appearance isn’t anywhere near slender either. You can easily describe my physique as athletic with a touch of elegance.

I’ve got a triangular head that is accented with a combination of smooth and sharp features. Now while my muzzle looks slightly pointy, they are framed by curvy cheeks that give me an expression of inquisitiveness. A short smooth chin also makes me look like I m constantly on the verge of breaking into a silly grin.

Moreover, I’ve always thought that my ears are a bit large, but they sure do make me look rather exotic. My eyes can either come in bright amber or a sparkling shade of blue. They can also be odd-colored, which adds a quirky element to my overall appearance.

I’m one curious kitty. I love to get in on everything my humans are doing in and around the house and will often follow you from room to room just to see what you’re up to.

It’s all part-and-parcel of my easy sociability. You see, I’m a friendly, people-oriented feline that has no issues getting along with humans and other pets. Just to make things clear though, I’m not the cuddly type. Although I like to be around my humans, I don’t like to be picked up and long snuggle sessions bore me.

That’s ’cause I’d much rather spend my time playing and working off my high energy stores with some vigorous exercise. I love to run and run and run, for example, and I’l prance and leap all over the house if the mood strikes me.

But solid ground is not the only place I can roam – blessed with a waterproof coat and superior swimming skills, I feel very much at home in the water. 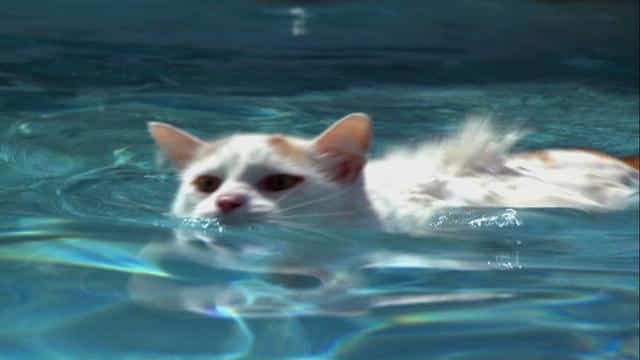 So much, in fact, that I’ve been dubbed ‘Swimming Cat.’ True to my nickname, you’ll often find me relaxing near the kitchen sink or playing in the tub. I’ve even been known to barge in the bathroom when I hear the shower running, so make sure you lock the door to keep me from sashaying inside unexpectedly.

Thanks to my powerful hind legs, I’m also a top-notch climber and when I’m not running or swimming, I’ll be clambering up bookshelves, cabinets, kitchen counters, and windowsills – pretty much anywhere that’s high and out of reach for most. And when I get to the tippity-tops of the household, I like to entertain myself by knocking objects down to the ground.

Did you know that vases, lamps and picture frames all shatter in different ways? Yes, I find it fascinating, too, which is why I’ll do it often.

If you’re not so fond of my experiments with gravity, make sure you stash your breakables away somewhere I can’t reach them.

When I’m not being mischievous, I’ll probably be coming around your way to engage you in a game or two. I am a master at fetch and you’ll be endlessly amused by my ability to catch toys in mid-flight or turn somersaults as I chase.

As active and playful as I am, you probably wouldn’t guess it, but I have a very sensitive side and this is something you must know about me before inviting me into your life. You see, I am known to get very attached to my humans, which makes it really difficult for me to be re-homed.

I just can’t forget everything that happened between us and sashay on to new faces and surroundings. So if you want me in your life, start when I’m a young kitten and commit to me for life.

Active and mischievous, I’m a cat that’s going to be constantly exploring and experimenting with the world around me. Which makes me ideal for cat lovers who can appreciate that part of me. Usually, these are more experienced fanciers who’re active enough to vigorously play with me and patient enough to put up with my shenanigans.

As I mentioned, I am sociable and I can even mingle with little humans, but if you have kids – just make sure you check in on me when I’m babysitting, since I can get surly or suddenly and startlingly bolt when the play has become too rough for my taste.

Oh, and please remember that I do get very attached to my humans. So if you want to be my (cat) lover – be sure you can commit for the long-haul.

Oh, darling, I am as old as the stars. My breed is an ancient one – and one of the oldest in the world of cat fancy.

My ancestors have been thriving in and around Turkey’s Lake Van region for hundreds and hundreds of years. Now while geneticists can’t pinpoint exactly when my ancestors began to live there, a few artifacts discovered in the area like jewelry, carvings, drawings and ornaments from approximately 5,000 years ago bear the likeness of a feline with a long coat.

As such, we’re a cat breed that’s seen history unfold. Experts say that my forebears reached the shores of Europe sometime between 1095 and 1272 AD, primarily as souvenirs? by explorers, traders as well as soldiers coming home back from the Crusades. Some are even believed to have hitched a ride in the caravans of merchants that traded in various fabrics and spices.

Fast forward to the 1950 s, Sonia Halliday and Laura Lushington, a couple of British photographers, were given two Turkish Van cats as a gift while they were on assignment for the Turkish Ministry of Tourism.

A cat fancier herself, Lushington took care of the felines until they became of age and allowed them to mate just to see what kind of kittens would be produced. The kittens, of course, turned out to be very much like their parents, which indicated they were purebred. Laura Lushington decided to set up a breeding program to help the breed get recognized by cat registries based in Britain.

She even returned to Turkey to find another pair to integrate in her breeding program. To maintain the original look and form of the Turkish Van kittens she produced, Lushington did not outcross even a single breeding specimen in her care to other breeds. All her hard work eventually paid off in 1969 when the Governing Council of the Cat Fancy (GCCF) officially accepted our juvenile breed in its roster.

My breed arrived in the United States in the 1970’s and immediately gathered a loyal following. Jack and Barbara Reark, cat breeders from Florida, were instrumental to the proliferation of Turkish Vans in America when they started a breeding program in 1983.

The International Cat Association (TICA) officially accepted the Turkish Van in 1985 and it didn’t take long for my breed to be granted our very own Championship status. Likewise, the Cat Fanciers Association (CFA) followed suit in 1988 and awarded us Championship after six years.

Bursting with vitality and playful energy, I am the very picture of health. And as such, I’m really easy to take care. I have no special dietary requirements – and I eat everything with gusto – and it only takes a weekly grooming to keep my coat silky.

There are, however, some health concerns that plague us. My breed can be prone to hypertrophic cardiomyopathy, a type of heart disease, for example so plan to take me to the cat doctor at least twice a year to make sure nothing of the sort happens to me.